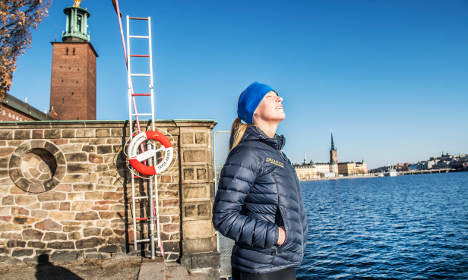 A woman enjoying the sun in Stockholm this weekend. Photo: Tomas Oneborg/SvD/TT

Although the week got off to a cloudy start in most parts of Sweden, according to the country's national weather institute SMHI you may have cause to dig out those sunglasses from Tuesday onwards.

The heatwave (as it were) is set to peak on Wednesday, with temperatures edging all the way up to 15C in southern and central Sweden.

Spring has officially already arrived in much of the Nordic country. The formal definition of the season is that the average daily temperature stays above zero for seven consecutive days.

“Stockholm got spring at the beginning of March. Statistically it usually arrives in the middle of the month or even as late as March 20th,” meteorologist Marcus Sjöstedt told the TT newswire.

However, don't hang up your winter coat just yet. The warm weather is expected to head west on Friday and northern Sweden could see the mercury drop below freezing during the day.

“It's quite difficult to forecast cloud cover this week. Various places across the country will definitely be treated to some sun, but we will have the occasional stubborn daytime clouds lingering,” said Sjöstedt.

A cold snap at the start of the year aside, the early arrival of spring follows a milder-than-usual winter, with one Nordic snow car race almost getting cancelled because of an unexpected lack of the white stuff.