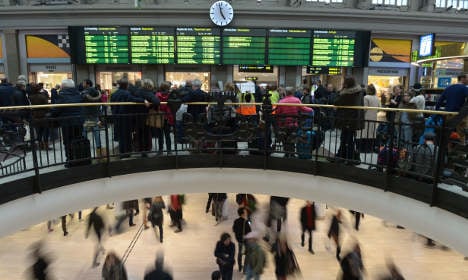 One in three passenger trains in Sweden either pulled into their end station behind schedule or not at all in 2015, according to fresh figures by Transport Analysis, a Swedish government agency which analyzes and reviews traffic statistics and policy outcomes.

Of those, 19 percent were at least two minutes late and travellers on one in ten trains suffered delays of more than five minutes.

In Sweden, only the latter get marked down in the record books as officially 'late', a more generous definition than in neighbouring Denmark, where trains formally count as late if they arrive more than three minutes behind schedule.

“Most delays are minor, but considering that almost a million trains depart over one year, the total time of delays for travellers is huge. This is time we could use for better things,” said statistics analyst Fredrik Lindberg, commenting on the findings in a statement.

Long-distance trains were the worst hit. Only 77 percent arrived on time or no more than five minutes behind schedule, with average delays of 17 minutes among the other trains.

Many a Swede and non-Swede are used to battling delays on their morning rides to work in winter, particularly in Stockholm where the long-running joke among suffering commuters is that snow seems to come as an annual surprise to train companies.

But short-distance connections, which include commuter trains as well as airport links, were among the most punctual according to Transport Analysis' statistics, with 94 percent of all the trains arriving at their end station with no delays longer than five minutes.

The Green party is one of the partners in Sweden's ruling centre-left coalition, alongside the Social Democrats, and the government has been trying to boost train travel in Sweden as part of its environmental drive.

The Swedish Transport Administration (Trafikverket) has been given an extra 1.2 billion kronor by the state to improve maintenance of Sweden's extensive and increasingly worn out rail network, to make sure that 95 percent of all trains arrive on schedule by 2020.

Lindberg warned that unless authorities continue to ensure smooth journeys for passengers, commuters and travellers may end up flying or going by car to work.

“In order to reach the transport policy objectives, more people have to choose to travel by train and other sustainable means of transport. That's why it's important that the rail service is reliable so that travellers dare choose the train,” he said.