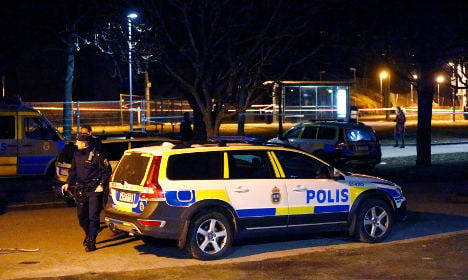 Police at the scene in Gothenburg. Photo: Thomas Johansson/TT

The pair, in their twenties, were stabbed by a lone attacker at the Opaltorget tram stop in the Västra Frölunda district of Sweden's second biggest city at around 9pm on Monday evening.

Police believe the incident was sparked by an argument on board one of the city's iconic trams.

It remained unclear on Tuesday morning whether or not the victims knew their attacker.

One man was seriously hurt and was taken to hospital. The other received minor injuries.

“The one who was injured the most has not been questioned yet. We're going to speak to the hospital today and see if we can talk to him,” police spokesperson Peter Adlersson told the TT newswire, and added that officers would spend the day examining surveillance camera footage.

Meanwhile, police were investigating a separate knife attack on a 22-year-old woman in Örebro, central Sweden, which took place at around 11pm on Monday. The incidents have not been linked.

The woman was standing next to her car in a car park when a man, understood to be a stranger, ran up to her and stabbed her several times in the arm. He then left the scene without saying anything.

The extent of her injuries was not known on Tuesday morning, but police said they were continuing to investigate the mystery attack.