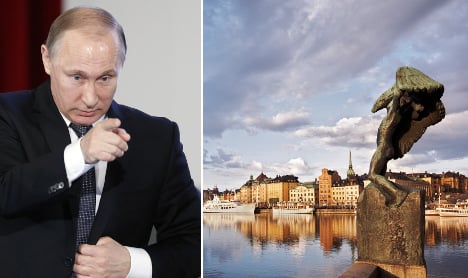 Russia's President Vladimir Putin (left) and Sweden's capital Stockholm. Photos: Sergei Chirikov/AP/TT and Ola Ericson/Image Bank Sweden
Säpo, which last year concluded that the biggest intelligence threat against Sweden came from Russia, has once again detailed how its eastern neighbour is using a range of aggressive tactics designed to rattle residents.
The security service's report, first seen and reported on by Swedish newspaper Dagens Nyheter, argues that Russia is carrying out various forms of psychological warfare via “extreme movements, information operations and misinformation campaigns” designed to target both policy makers and the general public.
It also states that around a dozen diplomats are operating as spies and confirms that some Russian embassy staff were asked to leave Stockholm in 2015, amid an uptick in tensions between the two countries, as The Local reported in September.
Other spies are understood by Säpo to be working for airlines and businesses operating in Sweden.
“We see intelligence activities in all these different areas. In the political, economic, military, and so on. The overall picture is very disturbing,” says Wilhelm Unge, one of the counterespionage researchers who worked on the report.
After Russia, Iran and China are viewed by Säpo as presenting the biggest intelligence threats to Sweden.
READ MORE: Why are Swedes so scared of Russian subs?
The report also singles out attempted acts of terrorism from extremist groups such as Isis as a major potential danger, arguing that efforts to radicalize young people in the Scandinavian country have reached unprecedented levels.
The security service's document states that more than 300 people have so far travelled from Sweden to fight in Syria and Iraq. Of these, 135 have since returned while 44 have lost their lives.
However, Säpo argues that record asylum applications in Sweden in 2015 did not drive up criminal activities.
“Säpo sees very few crimes in Sweden that can be linked to the large refugee reception,” says Ahn-Za Hagström, another of the report's core researchers.

Refugees arriving in Malmö in southern Sweden last year. Photo: Stig-Åke Jönsson/TT
But she points out that the tone of debates is shifting, with racist extremists and vigilantes in Sweden spreading increasing amounts of anti-immigration rhetoric.
“The current refugee situation, migration flows, is a driving issue for the white power movement,” she says, noting that far-right radicals are increasingly accusing asylum seekers of being terrorists.
These allegations have led to closer cooperation between Säpo and Sweden's Migration Agency Migrationsverket over the past 12 months, according to the report.
“The numbers themselves are a challenge for us in the security service, not least from a resource perspective,” says Malin Fylkner, the report's security analyst.
Last November a 22-year-old Iraqi man was wrongly arrested by Säpo for plotting a terror attack in Sweden. He later launched legal proceedings seeking one million kronor in compensation from the Swedish government.