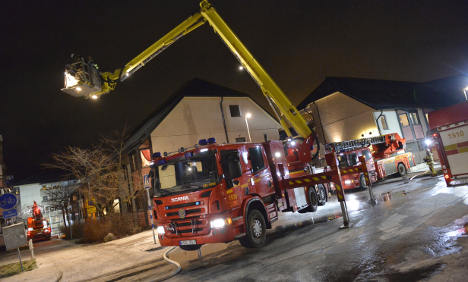 Emergency services at the scene on Sunday. Photo: Jonas Ekströmer/TT

The explosion took place inside a local business premises on the ground floor of an apartment block in Enskede, a southern suburb of the Swedish capital, just after 10.30pm on Sunday.

Witnesses described the blast as “powerful”, but officials confirmed that no one was hurt.

“There wasn't anyone in the room and we don't have any casualties. The fire was severe when the emergency services arrived at the scene, but the flames were extinguished quickly,” Jonas Fröjmark, a duty supervisor for Stockholm's fire and rescue service, told the TT news agency.

Enskede is a largely residential suburb, close to the Globe (Globen) and Tele2 Arenas, where Eurovision 2016 will be held in May.

Fröjmark said that his team had managed to stop the fire spreading to any homes close to the damaged office, but according to Swedish newspaper Dagens Nyheter, at least a dozen residents nevertheless fled the scene to spend the night elsewhere.

“Police have launched a preliminary investigation into damage that endangers the public,” added Fredrik Andersson, a duty police officer.

Technicians are understood to have spent the night examining the property.