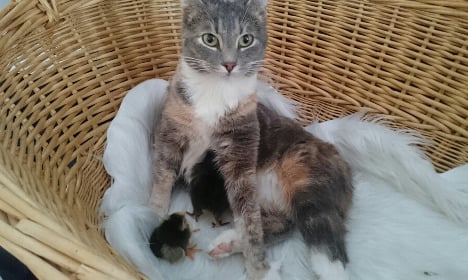 Elsa the cat and her chicks. Photo: Ingela Ljung

Ingela Ljung, who owns a farm in Strömstad in western Sweden, had planned to hatch some chickens in an artificial incubator ahead of a school class' Easter week visit to the farm.

However, the fuzzy yellow balls, who ended up being born last night, a day after the children's visit, instead found the most unbelievable fan imaginable in her one-year-old cat Elsa.

“She was walking around meowing last night, and honestly being a right pain, when she heard them chirp. I thought she wanted to eat them, it's food to her,” Ljung told The Local on Wednesday.

“But then I thought, okay fine, I'll let her closer so she can look at them.”

What happened next is incredible. Instead of attacking the newborns, Elsa carefully picked one up by its head – the way a cat lifts its kittens – and carried it over to the couch, where she proceeded to lick it.

“I then gave her another one and it was the same thing. The only problem is she wants them to suckle her and keep prodding them to do so, but they obviously won't, so she's getting a bit frustrated,” said Ljung.

The 40-year-old Swede said she had not yet decided whether to let Elsa keep her adopted babies overnight or not, and said she would see how she reacted later in the evening.

“I am also scared that she will be completely devastated if I take them from her. She seems to be completely convinced that they are her kittens. It's so cute I tear up, but it also looks so strange.”

She said she was overwhelmed with the attention after she published a video of the odd family on Facebook, which Swedish broadcaster SVT first wrote about.

“People don't believe it's true, but she is being so loving. She's purring and is caring for them very tenderly.” 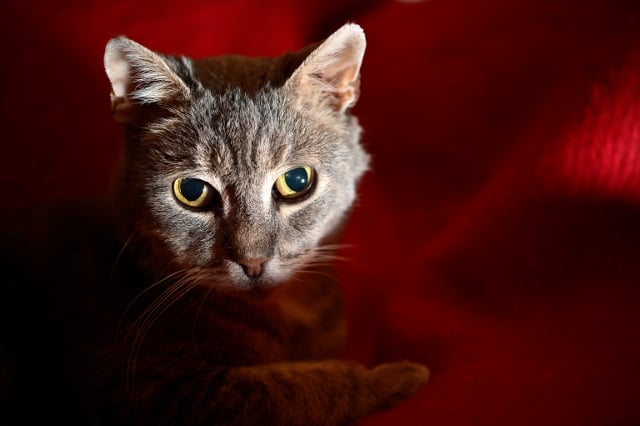