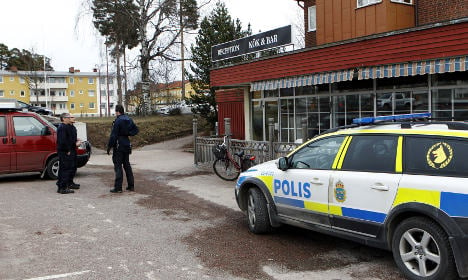 Police at the asylum accommodation in Rättvik on Thursday. Photo: Fredric Gustafsson/TT

Police were alerted just after noon on Thursday after a man had arrived at a local doctor's surgery in the town of Rättvik with serious stab wounds. He died from his injuries shortly afterwards.

“The man was staying in asylum housing nearby, where the incident is also said to have occurred,” said Dalarna police in a statement on their website published around 1.30pm.

Details remained unclear late on Thursday afternoon, with a police spokesperson only telling the TT newswire that judging from the nature of the man's injuries, they “could not rule out that a crime had taken place”.

“We'll be interrogating a large number of people who have been close to where this has happened. We have already started that work,” said control room officer Jonas Häll.

No arrests had been made by 4pm, but forensic teams were working at the Turisthotellet premises, a former hotel which was recently converted into refugee accommodation. The first residents, 85 asylum seekers, arrived at the centre late on Monday, according to regional newspaper Dalarnas Tidning.

The newspaper reported that the victim's wife and children were also staying at the centre. The council's crisis team was understood to be looking after them.

Thursday's incident follow three separate murders at refugee accommodation in the country in 2016, as Sweden, like the rest of Europe, has been struggling with the continent's biggest migration crisis since World War Two.

In 2014, there were 148 incidents at asylum centres throughout Sweden and in 2015 that number jumped to 322. Far-right arson attacks targeting shelters have also surged, with at least two dozen centres reduced to ashes or damaged by fire last year.

Sweden took in a record batch of asylum seekers in 2015, receiving 163,000 applications. However it has seen the number of migrant arrivals fall sharply since it introduced police border controls in November, followed by passenger ID checks at ferry terminals and Copenhagen Airport's train station at the turn of the year.