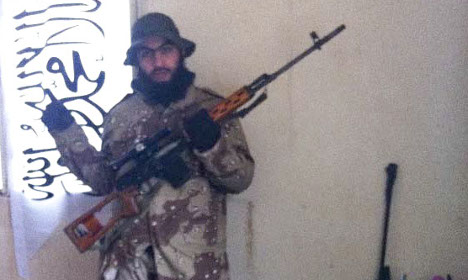 A photo of one of the men, Hassan al-Mandlawi, released by police. Photo: Swedish police
Hassan al-Mandlawi, 32, and Al-Amin Sultan, 30, both Swedish nationals, were found guilty by Gothenburg District Court in December of a series of terror offences, including taking part in the decapitation of two people in Aleppo in 2013.
On Wednesday their sentences were upheld by the Swedish Court of Appeal.
“We come to the same conclusion as the district court,” said Niklas Wågnert, the lead judge.
The case centred around movie clips in which two men have their heads cut off, which prosecutors said proved that the two accused were present when the murders were committed and that they belonged to a terror organization.
“This film is among the worst I have seen in my years as a prosecutor,” said lead prosecutor Agnetha Hilding Qvarnström in a written statement released just before the appeal judgment.
Neither man held the knife in the graphic films and both suspects consistently denied committing any crimes.
The lawyer for al-Mandlawi argued that his client should not have been prosecuted because a gunshot wound to the head left him wheelchair-bound and unable to communicate.
The pair were first arrested in July 2014 in Gothenburg. Prosecutors said that both of them had fought in Syria a year earlier because they sympathized with sharia laws advocating the creation of a caliphate.
Four other men have also been arrested in absentia in connection with the terror crimes, however it is unclear if these subjects are still alive.
“I know that there is evidence to suggest they may be dead, but as long as this is not confirmed, we regard them as living,” Qvarnström told the TT news agency earlier this year.