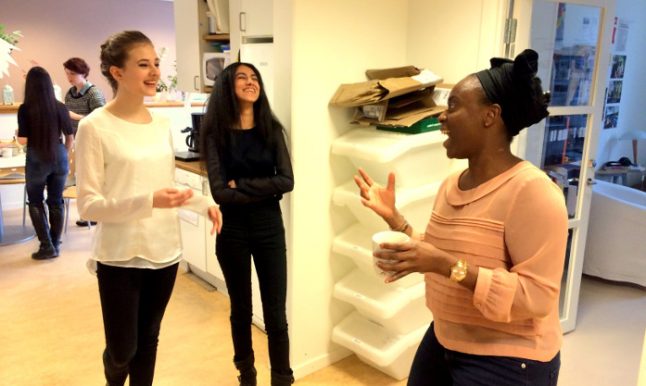 Not all new arrivals in Sweden are fleeing war. Just like the thousands of Swedes who emigrated to the US in the 1800s, many immigrants are simply seeking a better life.

”I came for education,” Yeganeh, 16, explains. ”I had a good life in Iran, everything was fine. But here…Sweden in one word is beauty. I have never seen anything like the blue of the Swedish sky…I just can't stop looking at it!”

Both girls moved to Sweden with their families last summer. So far, they love it – and they find Swedes to be very friendly people.

”The best thing about Sweden, compared to Romania, is that here they want to include the new people that come to this country,” Iulia says. ”They want us to be part of this country, feel included and learn the language.”

”People are so friendly,” Yeganeh agrees. ”It's so easy to hang out with people and find new friends, especially in school.”

It was school that put the two girls together. They met on the first day and felt an immediate connection.

The class consisted of dozens of students from around the globe, and while they found it scary at first, the girls quickly settled in. Ever since that day they've been thick as thieves.

“Yeganeh is so honest and supportive. She gives me a kind of support I never got from my friends in Romania,” Iulia says. And the relationship extends outside of school. The duo have recently become filmographers.

“We had a movie making lesson in class, and decided to take it outside of class,” Yeganeh says.

The girls met Rokibath Alssane, director of Move It, a project which aims to get newly arrived youth involved in extracurricular activities that is run by IM-Individuell Människöhjälp, a Swedish NGO working to combat poverty and exclusion.

”We match newly arrived youngsters, help them, guide them to ‘do it’ and find different after school activities that they can continue with in the long term,” Rokibath says. ”Our focus is on integration through interaction and finding something you're interested in.”

“Rokibath came to our class and asked if we wanted to do something outside of school, and I said, 'Yeah. Let's make a movie,'” says Iulia.

Perhaps it's a feat easier said than done. But the two ambitious teens wanted to do something to make a difference. Surrounded by peers who had been through traumatic journeys to safety in Sweden, they decided to make a movie about the lives of young newcomers.

The video, called 'Mitt Nya Hem' (My New Home), features the girls' peers and friends in their new lives, and reflects on what they've been through to get there.

”I showed the movie to my friends in Romania and they cried, really,” Iulia says. ”They cried about the situation of those people who left their countries to come here.”

The project was really just done for fun, but it took four months of hard work to put together, and plenty of support from Rokibath.

“They didn't have much experience or anything, but they believed in themselves,” Rokibath says. “I don't know anything about moviemaking either, but sometimes, students just want the support, someone to believe in them.”

Rokibath tried to find someone who could lend the girls equipment and help with the editing process, but really she just encouraged them to believe in themselves.

So what's next for the duo, now that their video is done?

“We want to go to the Oscars,” Yeganeh laughs. “Not as audience but participants. Because of our future films!”