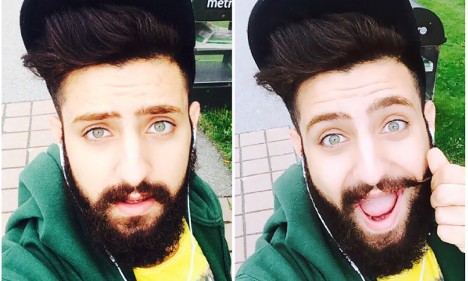 Mahmoud Bitar. Photo: Private
The Syrian former refugee, who has already built a huge following on YouTube, is set to make his debut as a presenter on the Swedish radio network on Friday, with a podcast of the show, which will be in Arabic, being released on the same day.
“It's amazing of course!” he said just ahead of the programme's launch.
“The subjects? We will speak about everything in Sweden,” he explained in English.
He revealed to The Local that one of his first guests will be a fellow Syrian refugee who witnessed 22 people dying on the boat that brought him from Turkey to Greece, before gaining asylum in Sweden, but ended up returning to the Mediterranean last year to help new arrivals.
“We will speak about the news, sport, media and we will help the new people here in Sweden – like refugees – by putting everything into Arabic,” the 21-year-old added.
He will be working alongside current Sveriges Radio reporter and presenter Miriam Imam Riaie.
“This is a dream project for me and I hope we will reach as many Arabic-speaking people in Sweden as well as abroad,” she said in a statement. Mahmoud Bitar. Photo: Private
Bitar started documenting his journey from Syria three years ago and quickly became a social media star by adding humour to his stories about his struggles as a refugee. His YouTube channel has had nine million views and he has half a million followers on Facebook.
However he caused a stir after moving to Sweden nine months ago by appearing to suggest asylum seekers should stop travelling to the Nordic nation.
In August the BBC posted a video in which the refugee is seen telling viewers in English “don't come to Sweden – or at least think carefully about it”.
However he told The Local at the time that there had been a “misunderstanding”.
“I said you should think carefully if you are going to live in Sweden because you must be hardworking. The BBC cut that last bit out.”
He added: “There are some people, some people…maybe ten percent…who think if they come to Sweden everything will be easy and free and that is what I told them. That idea is not true. You have to work here. All the refugees must be hardworking.”
READ ALSO: Syrian comic says refugees 'don't prefer Sweden' any more
Bitar told The Local this week that he had landed his first job last autumn, working with the High Chaparral theme park in western Sweden, which has been hosting refugees.
“I help all the new refugees here, I translate to them and things like that,” he said, adding that he would continue his work with the company alongside his radio show.
Despite Sweden recently cracking down on the number of asylum places available in the Nordic country and rising support for the nation's anti-immigration party, the Sweden Democrats, Bitar said he remained convinced that most Swedes are open and tolerant towards refugees.
“It is more difficult now (…) But Sweden all the time says 'hello' to everyone,” he said.
“This is my second country. I found nice people here, great people, and I have found a lot of people have liked to help me.”
Bitar's show will be broadcast at 4.30pm on Sveriges Radio's P2 channel.