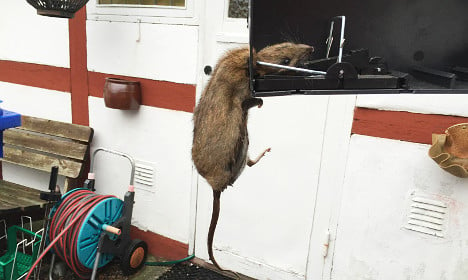 This rat measures almost 40cm from the tip of its nose to the end of its tail. Photo: Private

Michael Rausman has a lovely view of the sea from his house outside the village of Glumslöv, but his idyll has been shattered by the arrival of the monstrous rodents.

“We’ve killed seven so far. The biggest is over 20 centimetres in length, and its tail measures another 17 centimetres,” he told The Local.

“It’s disgusting. Actually it’s the most disgusting thing I’ve come across in my life.” “A couple of rats can produce up to 1,000 cute babies in only one year!” Rausman notes. Photo: Private

Rausman disposed of the first of the rats himself, but when he saw the giant specimen hanging from a trap he called in pest control.

Michael Rausman is a worldly man. He speaks impeccable English, having spent some of his childhood years in northern England; he chairs the Helsingborg branch of the Swedish Inventors Association; and he runs his own advertising agency. But nothing prepared him for the march of the monster rodents.

“They are so big! One died under the floor in the hall. The smell was just awful,” he said. He said the rest of the village was almost certainly crawling with rats too, but nobody was talking about it.

“If we have rats, everyone has rats. People are embarrassed; it’s not something you talk about.”

But with local media streaming to his home to catch a glimpse of the creatures, he reckons it’s about to become a major talking point.

And his inventor friends are already getting in on the act, suggesting ways to augment his system of traps and poison. With the rats showing no sign of moving on, he's open to all suggestions.

At least he can console himself that his horror rodent wasn't as big as the Swedish “rat from hell” that made global headlines in 2014.

“I couldn't help but do the old classic and jump on the kitchen table and scream,” that rat finder Signe Bengtsson told The Local at the time. The 2014 rat from hell measured almost 40 centimetres – not including the tail! Photo: Justus Bengtsson-Korsås