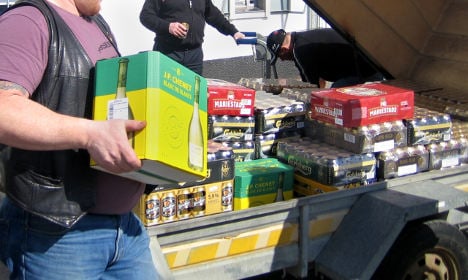 Swedes not linked to the article buying beer in Germany. Photo: Drago Prvulovic/SCANPIX

The pair got caught at customs in Helsingborg in January 2014 with 867.36 litres of beer, 236 litres of wine and 69 litres of spirits in their car, returning from a rather substantial spending spree in Burg, Germany.

It is not uncommon for Swedes to make regular trips to other European countries to purchase alcohol, avoiding high prices at the country's state-run monopoly Systembolaget.

The man and woman claimed when questioned by officials that they had bought the alcohol, at a value of around 30,000 kronor ($3,700), for a wedding.

However, officials and a district court argued the haul exceeded the limit of what could reasonably be considered 'for personal use' and suspected they had tried to smuggle it into Sweden to sell on the black market.

But an appeals court has now ruled in favour of the pair, reported the Sydsvenskan newspaper on Tuesday, writing that a series of witness reports read out in court supported a claim that the two people had a habit of consuming a lot of alcohol and often threw parties for friends and family.

They will now have all the booze returned to them, ruled the appeals court.