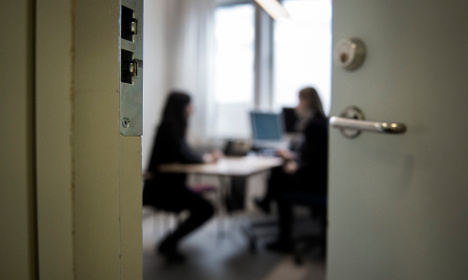 A person applying for asylum in Sweden. Photo: Marcus Ericsson/TT

“This has been the most difficult task I have had on my desk in my almost 20 years as a politician at this level,” justice and migration minister Morgan Johansson told a press conference in Stockholm.

The plan builds on a proposal first mooted by the ruling centre-left Social Democrat-Green coalition in November last year, following a record influx of asylum seekers to the country.

However, it eases some of the tough restrictions initially proposed, following criticism by experts, other authorities and government agencies.

The changes to the November proposal include:

– Temporary residence permits will be extended for 13 months rather than 12 months, which means refugees are covered by Swedish social security benefits such as child care funding.

– Those who land a job may be given permanent residence permits. However, this will not apply to people under the age of 25, unless they have completed the equivalent of a high school education. This is to avoid young refugees dropping out of school to seek employment.

– In some “special cases” family reunification and the process of getting permanent residency for minors, for example children with health problems, will be made easier.

“It's not the case that we've closed the borders. More than a hundred asylum seekers are still coming every day. We're doing more than anybody else, we're making the biggest humanitarian effort since World War Two. I think we should be bloody proud of that,” Johansson was quoted as saying by Swedish tabloid Aftonbladet. The government's bid was criticized by politicians left and right of the centre on Wednesday.

“It's still a proposal which is an incredible tightening of refugee policies and makes it difficult for people who are fleeing,” Left party leader Jonas Sjöstedt told the TT newswire.

Meanwhile, a spokesperson for anti-immigration party the Sweden Democrats argued it was too lenient.

“To make sure that Sweden doesn't become the most attractive country in northern Europe, we would need stricter rules than our neighbouring countries. We're not getting that,” said Mattias Karlsson.

Sweden took in around 163,000 asylum seekers last year, but struggled to provide accommodation for all of them. The number has since gone down, following border and ID checks introduced around the turn of the year, with around 500-700 weekly applications at the moment.

However, according to the latest forecast by the Migration Agency, up to 140,000 may arrive in 2016, which Johansson said would mean that Sweden would run out of housing by the summer.

“If we don't do anything we risk going back to the situation we had last autumn,” he said.

If approved by parliament, the proposal is expected to come into effect this summer.