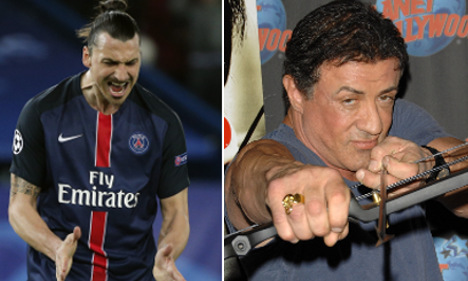 Never one to shun the limelight, Sweden's star striker claimed on Thursday that he could make a film about his life and portray it as a 10-part saga – just like the '80s action movies about Rambo, played by Sylvester Stallone.

“There are talks but nothing has been decided,” the Paris Saint Germain star told Swedish business newspaper Dagens Industri.

“Lots of other people do films about me, my life and make money but it's obvious that if the subject of a movie is me then I should have control.

“There are talks in progress. We can make a lot of films about me. It would be like Rambo I to Rambo V – we could do Ibracadabra 1 to 10.”

The star's comments come seven months after he first hinted to journalists about his plans to hit the big screen.

In October he told Swedish tabloid Aftonbladet that he was having talks about a secret movie project rumoured to be focusing on his upbringing in the troubled Rosengård area of Malmö in southern Sweden and his rise to global footballing fame.

“Everything is about what I want to do. If I want to. So we'll have to see. It would have been fun if something came around,” the player said at the time.

“But we have to see, a lot of other things have to click. You can't just say 'I want to' and somebody tells you 'we can do it'. But discussions are being held.”

Published in November 2011, a text version of the player's story, 'I am Zlatan' quickly became one of a Swedish best-seller and proceeded to sell millions of copies all over the world.

However Ibrahimovic's movie goals come amid controversial claims by Ulf Karlsson, the former leader of the Swedish athletics team, that a part of the footballer's career where he was doped may have, until now, been hidden from the media.

The star's agent has strongly insisted that the allegations are untrue and said that Ibrahimovic will take legal action against Karlsson.