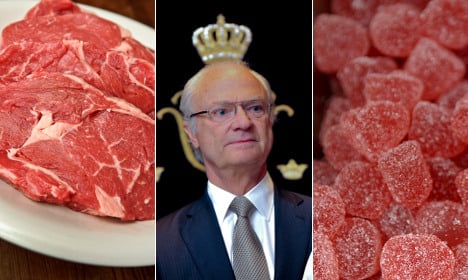 “It's very healthy to eat meat, but you don't have to eat bloody steaks every day. Not jelly raspberries either. You should think of a balanced diet and eat a little bit of everything,” said the Swedish royal in a long weekend interview with the Aftonbladet tabloid.

The King admitted that he himself had made the decision to eat less red meat and popular Swedish jelly sweets mainly for health reasons rather than environmental concerns.

It is not the first time the Swede has grabbing international headlines for his green activism, and he referred to this during his interview.

Last year he suggested all bathtubs should be banned, after he was forced to run a bath because the hotel room in which he was staying lacked a shower.

“I caught myself reacting to the fact that I was not able to have a shower, there wasn't one. Things are going in the right direction then, when you get annoyed about having to take a bath,” he told Aftonbladet.

Notorious for his large fleet of automobiles, the King has previously revealed that he drives a hybrid car, a Volvo, which runs on petrol and electricity.

But a question about recycling at the Drottningholm castle, where the royal family lives outside Stockholm, left him somewhat stumped.

“You're asking too many questions. I don't even have time to answer. That was a difficult question,” he told the reporter. “Personally, I try to recycle what I can. Many years ago we asked ourselves where the rubbish went and organized a small waste seminar with the municipality. Now, there's a place where you can go and recycle the rubbish.”

The royal, who turns 70 later this month, is soon set to become a grandfather for the fifth time, as his daughter-in-law Princess Sofia is expected to give birth to her and Prince Carl Philip's first child.

His eldest daughter, Princess Victoria and her husband Prince Daniel already have two children: four-year-old Princess Estelle and newborn Prince Oscar. Princess Madeleine meanwhile lives in London with her two children, Princess Leonore and Prince Nicolas, and her British-American husband Chris O'Neill. But the King admitted he has not been the most active baby sitter so far.

“To be honest, it does not happen very often. We are pretty busy. I read an interview recently with Princess Madeleine where she expressed that she, as a child, missed her parents because we were away so much. It was a right misery every time we had to leave, it was very difficult both for us and for her. She expressed that in this interview and I was really touched,” he said.

“They're so small so there's not much to do just yet. Estelle is starting to grow up so we could probably get up to something soon.”