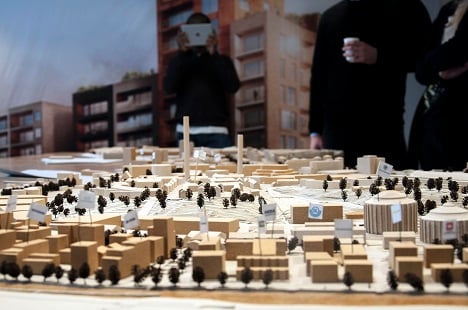 What does it take to qualify as a 'contemporary' city? A crucial determining factor is probably the lifestyle of the residents. Since obtaining the title of the European Green Capital in 2010, Stockholm remains an urban laboratory for sustainable urban planning and ‘green’ innovations.

In the framework of an inspiring study visit to Stockholm, recently organized by the Swedish Institute for NFGL members, we had the chance to discover the main challenges of contemporary urban planning during the lecture of Dr. Tigran Haas, and witness the implementation of innovative solutions during the guided tour to the new urban development site Royal Seaport.

So what does being sustainable mean?

As with all complex notions, the understanding of sustainability has changed with time and devevloped very different and even contradictory interpretations.

But, probably, the most widely used definition is that of the Brundtland Commission: “Development that meets the needs of the present without compromising the ability of future generations to meet their own needs.”


Around the development area

Sustinability presents many challenges, though. First of all, it requires cooperation and layering within different fields: economic, environmental and social issues are often considered separately.

For example, some ecologically-oriented urban projects that are treated as sustainable, don’t take into account social aspects. Secondly, in urban planning, excluding some passionate attempts, there is often some kind of gap between theory and practice. Thirdly, there is frequently a discrepancy between what was intended by professionals and what is experienced by users.

But Stockholm’s example makes one believe that these challenges could be overcome – and in some places they already addressed.

Dr. Tigran Haas, Associate Professor of Urban Planning and Urban Design at KTH, said that we are undergoing “a crisis of material actions, a crisis of ecology, a crisis of our cities and neighborhoods, of our built environment, and of our planet Earth.”

He pointed out that understanding these risks has provoked the creation of various types of approaches to solve the issues: green, sustainable, ecological, radical, livable, resilient etc. urbanisms, which could become effective only if the majority of mankind accepted such conscious lifestyles.


Materials sensitive to the natural environment

Additionally, such approaches as everyday, lean, pop-up urban areas are giving diverse tools for small interventions with lasting effects. As an example of a platform where theory and practice could be connected, Dr. Haas introduced the Civitas Athenaeum Laboratory that is based on the systematic inter-disciplinary thinking about cities’ present and future.

The above-mentioned approaches are not empty words for Stockholm, and, along with the natural and historical advantages of the city, they were applied in the city owing to a number of systematic decisions and policies.

It is worth noticing that along with the official building restrictions, specific additional codes and restrictiosn were developed. To create environmental diversity, plots were distributed among different building companies, capable of following additional restrictions and the development concept.

Although the project is completely commercial,  building companies need to collaborate instead of compete in order to make new mixed-use development ‘work’ effective.

Another aspect is involvement of users – both residents and workers – into the development of the common sense of a sustainable way of co-living by means of educational events, meetings, and consultations.

Although there are foreseen different housing typologies and ownership models, there is no affordable housing for the moment; the new development is interpreted as an experimental platform for knowledge production, which, of course, needs investments. Every artificial complex project inevitably would obtain some imperfections, but it’s much easier to fix them, if one made a long-term goal, and moves toward that goal with small steps, learning from each stumble.

Likewise, the development of the Royal Seaport is a complex and step-by-step process of doing and learning, expected to be completed during the next few decades. Recreational area on the border with National City Park

It might be a crucial principle: being in this constant state of improvement. An appropriate and specific way of being sustainable, probably, should be developed for every single city and case. While there is no universal formula, progress can be made through consistent research to gain common goals by mutual actions: professionals’ attempts and users lifestyles, and, of course, attention to what the city says back.