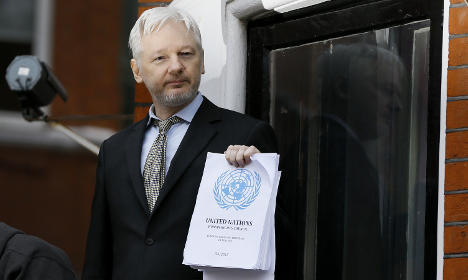 Julian Assange at the Ecuadorian embassy in Londonin February. Photo: Kirsty Wigglesworth/TT/AP
Julian Assange's lawyers and a UN Working Group on Arbitrary Detention have been fighting for the European arrest warrant against the whistleblower to be lifted, arguing that he is being forced to live in violation of his human rights, including the chance to secure asylum in Ecuador.
However Swedish prosecutors confirmed on Thursday that they were still seeking to question the fugitive Australian over a rape allegation in Sweden dating back to 2010 and indicated that he should not be allowed to walk free from the embassy in the meantime.
“Assange is still on probable cause suspected of a serious crime and his flight risk remains,” they said in a written statement handed to Stockholm's District Court.
The prosecutors' latest request to interrogate Assange in London was sent to Ecuadorian officials in March, but the Swedes have not yet received a response.
Assange, 44, has been living in the embassy since 2012 after Ecuador granted him political asylum.
He denies the rape accusation and says he fears Sweden would send him to the United States, where he is the target of a secret grand jury investigation linked to his website's divulging classified US military documents and diplomatic cables.