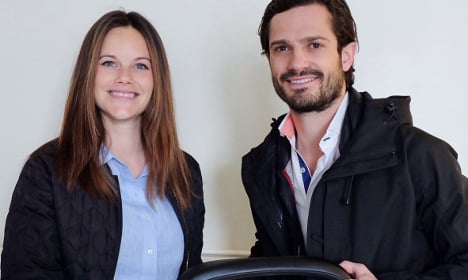 Gun salute in honour of the new prince on Wednesday. Photo: Jessica Gow/TT

Prince Carl Philip and Princess Sofia released the first picture of themselves and their newborn son on Wednesday afternoon. A statement published on the Royal Court's website said they had left the hospital and were currently enjoying their new life as a family at Drottningholm castle west of Stockholm.

The picture was taken in similar style, although in arguably better quality, as the first picture of Crown Princess Victoria and Prince Daniel's second child, Prince Oscar, also snapped at the hospital. Gun shots rang out across Sweden at noon on Wednesday, in honour of the new prince. In Stockholm the 21-gun salute was fired from the Skeppsholmen island.

His grandmother Queen Silvia is in New York this week, but earlier in the day his grandfather King Carl XVI Gustaf paid a visit to Danderyd Hospital to say hello to the new prince.

The baby's name, which Carl Philip said yesterday has already been decided, will be revealed on Thursday. And the King refused to let slip the secret.

“Take it easy! That's what it's all about. There should be a little hocus-pocus to it all and some excitement,” he laughed. The palace said in an earlier statement that both Princess Sofia, 31, and her new son were in good health. She famously posed topless with a boa constrictor in a men's magazine when she was 20.

She later studied accountancy in New York and became a yoga teacher, while also working as a waitress before returning to Sweden.

READ ALSO: How a reality TV star got a Swedish fairytale

Sofia has since headed an NGO for disadvantaged children in South Africa which she founded in 2010 after earlier African charity work, but gave up the role after her marriage to focus on royal duties.

The new baby prince already has plenty of royal cousins to play with. Prince Oscar, the second child of Princess Victoria, was born just seven weeks ago. He is the younger brother of four-year-old Princess Estelle. London-based Princess Madeleine also has two children, Princess Leonore and Prince Nicolas.

Ahead of the announcement of his name on Thursday, there has already been plenty of online speculation that 'Dalarna', the region of Sweden where Princess Sofia comes from could be included in his title.

Meanwhile congratulations immediately began pouring in from around the world, with the hashtag #CarlPhilip still trending in Sweden at 8am. Below is a selection of some of the well wishes.

HOORAY for our newborn prince! And congratulations to Prince Carl Philip and Princess Sofia on their little one. https://t.co/TUHyqgk0VQ