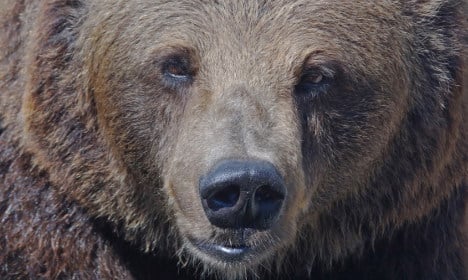 Hussain Jan was on his way from Bräcke to Sollefteå in northern Sweden on Monday when he saw a group of what he thought were three elks at the edge of the woods and picked up his mobile phone camera.

“Getting a picture of an elk is something very nice for me. Then I got closer and saw that it was a bear, and I zoomed in on it. I thought, shit, it's a bear. I'm seeing a bear chasing two elks. Right now I'm still in a state of shock,” the wildlife fan told the regional ÖP newspaper.

His clip quickly went viral after he shared it on Facebook, with Jan revealing that he had been spending most of Tuesday afternoon fielding phone calls from Swedish journalists.

“I'm a social guy and am not too bothered. I reply to questions if I'm able to, but I don't have time to reply to all,” he said.

Around 2,700 bears live in Sweden, according to WWF. They are the country's largest predators with an adult male weighing up to 250 kilos, but usually stay away from humans.

And Jan, who lives in Ånge, said he did not think he would see anything like this again.

“No, I don't think so. I've been out in the woods quite a lot and I've never experienced anything like it,” he said.

In this case, the bear abandoned the chase after he was interrupted by Jan in his car. But on flat surfaces and long distance, an adult and healthy elk can usually outrun a bear, which reaches speeds of up to 50 km/h.

This is not the only close encounter with a bear in Sweden in the past year. In October a hunter spoke to The Local about his surprise when his dog chased a 120-kg beast up in a tree. And last May, another Swede grabbed global headlines after he scared off a charging bear by roaring at it (don't try this at home, kids).