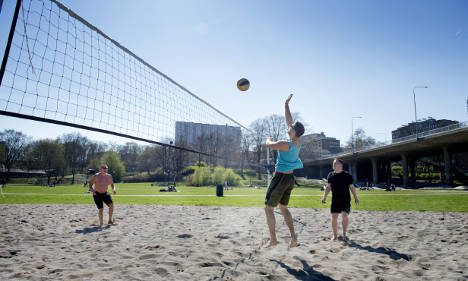 =With most of the nation already basking in sunshine as the Monday morning rush hour got under way, forecasters were predicting a treat of a week, with many residents set to experience their warmest weather yet this year.

Temperatures are likely to reach around 20C in the south and east of the country in the coming days, with Stockholm also expected to enjoy highs of 19C on Ascension Day.

Even Umeå in northern Sweden is set to enjoy temperatures of up to 17C, while almost all of the Nordic nation is likely to celebrate double digits over the public holiday.

“It looks like it will be a really lovely week,” forecaster Charlotta Eriksson told the TT news agency.

“Along the east coast, it could actually be more than 20 degrees on Saturday and Sunday (…) forecasts have shown there will be high pressure.”

Cloud and rain is expected to return on Friday and Saturday in some parts of the country, however sunny weather is set to stick around in the Swedish capital and further south until at least the beginning of next week.

The expected warm patch will come as a relief to Swedish residents who were forced to endure a string of damp and grey public holidays last summer and have this year experienced an unpredictable and sometimes even snowy spring.