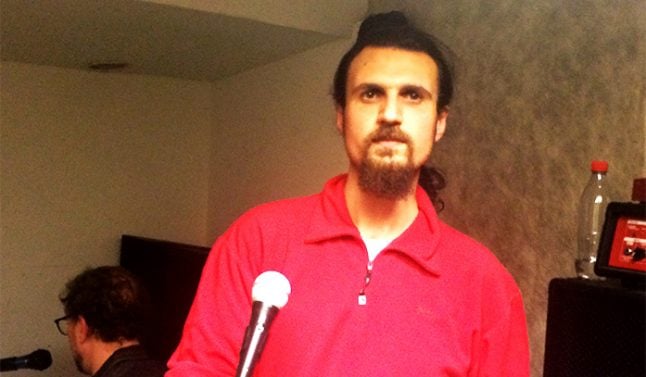 While the devastating war is perhaps the most common reason so many Syrians have migrated to Sweden in recent years, the violence is hardly the only thing that has caused people to flee.

For Usama Soliman, 29, a heavy-metal musician, exile in Sweden started with music. More specifically, Soliman is in Sweden because of his band, ‘Karaj Adeem’ (‘Old Garage’), which he formed in 2008 along with four other friends.

The project may have been doomed from the start – in 2009, Usama was called into compulsory military service and in 2011, his country was “set on fire”, making it hard for the band to develop.

Not only did “Old Garage” anger authorities, but the Macabre music, intense moshing, and outward appearance of Usama and his fellow metal heads also resulted in exclusion from within Syrian society, where they were sometimes viewed as Satanists.

“I have my own reasons [for leaving Syria]. I’m escaping from a society – not only war. As heavy metal musicians, our thoughts and ideas are not accepted there,” he explains.

Usama tells of the aftermath of the final Karaj Adeem performance in his home town of Tartus in the summer of 2014 that resulted in a formal police inquiry.

“The police asked, ‘What do you think you’re doing? Don’t arrange such concerts again,’” he recalls. “They even accused us of inciting unrest and encouraging people to engage in anti-government demonstrations.”

While Usama clung to hopes of creating a “Syrian metal scene”, he ultimately left the country.

“I realized my journey was to be continued in a different place,” he explains. “I had many friends in Sweden and I love Scandinavia, so that’s why I moved here.”

And shortly after arriving in Sweden in December 2015, Usama soon found himself connected with a group of Swedish rockers – thanks to a chance meeting and a Facebook post.

“It all started when I walked outside of the asylum center to smoke a cigarette. I saw a journalist named Jesper and we started chatting,” Usama recalls. “He knew I was a guitarist and a heavy metal geek so he told me he’d try to connect me with some of his friends.”

“Two other guys, Rickard and Olov read the post, and invited me to join their small band,” he adds.
Members of the new cross-cultural constellation of metal musicians call themselves ‘The Fortunate Fans’ and they now rehearse a weekly basis for fun in a tiny makeshift studio in downtown Stockholm.

The new band gives Usama a chance to meet new people and forget about his previously stressful life in Syria – and perhaps most importantly – revive his guitar-hungry hands.

Usama (middle) and 'The Fortunate Fans' at a recent rehearsal. Photo: The Local

“For me it’s a chance to meet Swedes who I have something in common with. I get to learn the language – and move my fingers,” he says with a smile.

“It helps take me out of that atmosphere of feeling like I’m only a refugee, which often entails others looking to help and or take pity on me. Now I really feel I am in ‘Sweden’.”

As ‘The Fortunate Fans’ continue to play in Stockholm, Usama is on his way to also reviving Karaj Adeem in Sweden.

An important first step took place recently in Visby on the Baltic island of Gotland where Usama reunited with drummer Rayan Alsayed, an original ‘Old Garage’ band member who also migrated to Sweden. The two performed together in a joint concert with Bleak Summit, a local Swedish metal band that Rayan joined last autumn.

It was the first time the two had performed together since being forced to abandon the project in Syria – but they hope it won’t be the last time they make music together in Sweden.

“Karaj Adeem is my lifetime project, my dream that will come true – and I will make it happen here in Sweden,” Usama proclaims.