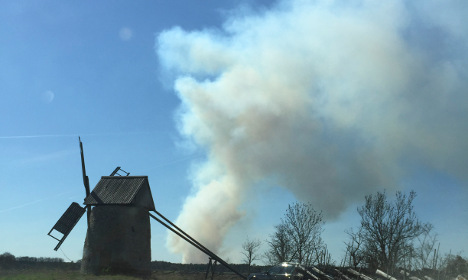 Since the fire broke out on Friday afternoon it has spread to cover an area of nearly two square kilometres. Photo: TT

Since the fire broke out on Friday afternoon it has spread to cover an area of nearly two square kilometres.

Changing winds have not only complicated firefighting efforts but caused the smoke generated by the fire to intensify.

“When the fire was moving east, there were no buildings at risk. But the southeasterly to easterly winds on Saturday blowing over the island mean that the fire will instead go west, towards Vänge village,” he said.

“The wind will be strengthening to nine meters per second, which means that the fire which will go toward the settlement. We will take a view at noon to decide on whether to evacuate the residents.”

It is estimated that round 50 households may end up being at risk if the fire spreads westward.

At 7am three helicopters were deployed to fight the fire.

“We will water bomb the fire on its western flank to hopefully prevent the spread westwards,” Svennefelt said.

Gotland, situated in the Baltic Sea off the east coast of Sweden, is Sweden's largest island and is a popular holiday spot for both Swedes and foreigners.