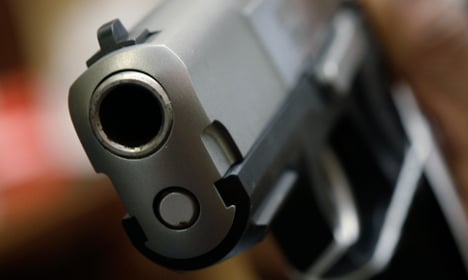 File photo of a handgun not related to the article. Photo: AP Photo/Matt Rourke

Five of the suspected weapon smugglers were seized in the towns Gradiska and Laktasi in Republika Srpska, according to its interior ministry. Authorities further stated that another person had “previously” been arrested in Sweden, while another two remained at large.

Five arrests were made by Bosnian-Serbian anti-terrorism officials on Thursday, said officials, after large quantities of military-grade weapons were found during police raids.

A spokesperson said the arrests were carried out as part of Swedish-run operation called 'Varg RS', but Swedish authorities would not confirm nor comment on the police raids.

“We have no comments to this information at present. We await more information from Bosnia,” national police spokesperson Carolina Ekéus told the TT news agency.

According to claims in Bosnian Serb media cited by TT, police suspect that the smugglers had intended to deliver the weapons to a group in Sweden called 'Muslim Brothers'.

It was not immediately known whether or not the group was linked to the islamist movement the Muslim Brotherhood, which has its roots in Egypt.

Terror experts as well as police and Sweden's Interior Minister Anders Ygeman have previously spoken about the illegal arms trade route from the Balkans to Sweden.

“What makes us notice criminality more is the amount of illegal weapons in the city. We seize far more weapons and we notice that they are much more accessible than before,” Mats Karlsson of the Malmö police told Danish newspaper Berlingske last summer.