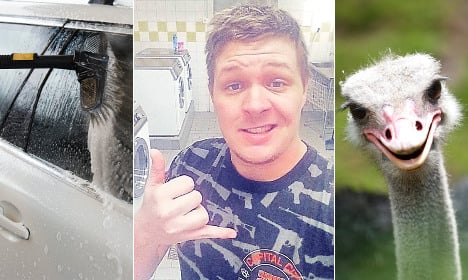 In the capital, soaring property prices and a divided rental market mean that many ordinary Stockholm residents resort to short-term, second-hand contracts at inflated prices in order to find a place to live, with even these hotly contested. So much so that there are entire Facebook groups dedicated to hunting them down.

A well-known example is Lägenheter i Stockholm (apartments in Stockholm) which has over 65,600 members. Yet even apartment hunters accustomed to accepting less than ideal conditions in order to put a roof over their heads would have been shocked by an ad posted by member Tommi Kauppila earlier this month.

“There’s no shower or toilet, but it’s near the local petrol station where you can wash in the carwash and use the toilet etc. Nine months’ deposit, but the cellar is rented out for two months. Only men who are exactly 27 years, nine months and seven days old can reply. You should own at least one dog, two ostriches, and have four kids. Respond via PM.”

Rent a home in Sweden with The Local

The Local contacted Kauppila to find out what inspired his creative take on Stockholm's housing situation, and unsurprisingly, frustration played its part.

“It was about how unbelievable the housing market looks, people hire out their apartments at stupidly high prices with unreasonable demands,” he said. “It’s only easy to find an apartment if you’re willing to pay 15,000 kronor for a studio in some random suburb. The worst I’ve seen is someone charging 10,000 kronor for one room in his apartment,” he added.

The writer isn't alone in his sentiment. His post has received 3,300 likes and over 300 replies from members who seem to appreciate the sharp take on what can be an incredibly frustrating situation. The joke has snowballed further in the comments section, with one ‘hopeful’ asking “I have three camels and two cows. Are they allowed to use the toilet in the gas station?,” to which Kauppila replied “Are any of the camels good-looking? I’m actually looking for a girlfriend…”.

The success of the mock ad echoes sentiments expressed by many Stockholmers, including startup workers, who held a protest over the capital's housing crisis on May 11th outside the Swedish parliament. That followed an open letter by the Swedish founders of Spotify in April, in which they suggested that a lack of available housing is making it difficult for them to attract the best talent, to the degree that they could be forced to grow in other countries rather than Sweden unless the situation improves.

As for satirist Kauppila, in perhaps the most damning indictment of Stockholm's housing situation, it seems not everyone appreciated the humour in his ad.

“Some people replied (seriously) to begin with. I think most were people who didn’t read the whole thing and just wanted to respond instantly to be first,” he concluded.