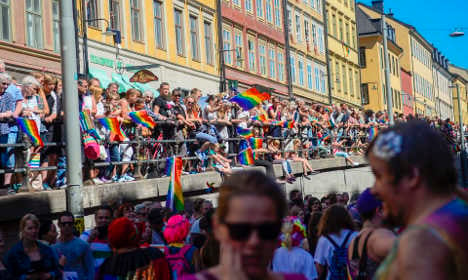 Let me ask you a few questions. Is the Earth round? Is slavery immoral? Should women have the vote?

But the answers were not so simple in previous decades and centuries. Indeed, there are still those who would answer “no” now, in the 21st century.

Bruno Edgarsson, who is head of Växjö diocese's administrative board, as well as a member of Sweden’s Centre Party, is similarly backward in his thinking.

Last week he described homosexuality as “just a trend,” in response to other priests' participation in a Gay Pride parade.

“I am definitely against Pride. I think it should be a man and a woman and I can’t reconcile myself with LBGT,” he told local paper Smålänningen.

“I don’t know why they choose to become homosexuals, but I believe it has become a trend among young people, and then it isn’t easy to remove yourself from it.”

It was a shocking thing to say. Not just because Edgarsson is demonstrably wrong. But also because it was said here, in Sweden, one of the most socially progressive countries on the planet.

A 2013 Ipsos study found that Sweden is the most liberal country in the world regarding gay rights. Only 9% of the population believe that gay couples should not have the chance to be legally recognised as married.

Even Edgarsson's colleagues were unaware of his boneheaded opinions.

A Centre Party spokesperson told The Local that it had distanced itself from the statements, and that the party had not previously been aware of Edgarsson’s thoughts on the issue.

“I didn’t previously know about these thoughts on homosexuality. It was news to me,” said Per Schöldberg, the Centre Party’s chairman for the Kronoberg district, where Edgarsson is based.

“It was news to me,” is a telling comment.

The intolerant minority in Sweden very rarely pipes up. Swedish society tends to shut down discussion on controversial issues once broad agreement has been reached.

Part of that is down to Swedes' hatred of confrontation.

However, there is an element of condescension involved. An element of “we know best,” that cuts any further argument off at the knees.

The annoying thing is that, generally, the intelligent majority do know better.

Of the 19 peer-reviewed studies on the origin of sexual orientation since 1990, only one has cast doubt on the likelihood that people are born gay and there is no choice involved in your sexuality.

Most of us have seen summaries of many of those studies. We know the science is sound. To even think that people choose to be gay or straight seems ludicrous to us.

But there are those of us who do not read intelligently around subjects, who prefer to take our opinions from religious tracts and the ravings of conspiracy theorists on the internet.

There are also those who are just plain ignorant.

And, of course, there are those of us whose hatred of homosexuality stems from being in denial of our own true sexuality – we all know someone like that.

Edgarsson may have done us a favour with his outburst straight from the 1930s, however.

The ensuing debates I've seen on Facebook seem to have flushed out a few more recalcitrant bigots, many of whom tried their luck with some breathtakingly vacuous arguments (the lie about there being no homosexuality in the animal kingdom is almost hilarious now it's been so thoroughly discredited).

Their views were shot to pieces.

The only way to deal with this ignorance is to expose it to the light of rational thought.

We need to talk more in Sweden.

We need to talk until the intolerant minority have no arguments left.

We need to talk until there's nothing left to say.