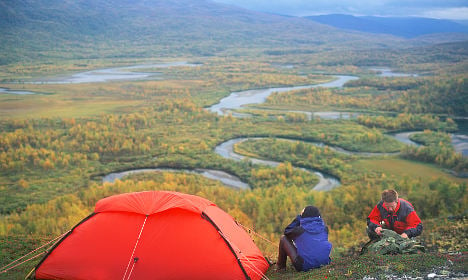 They first got special status in 1909, when the Riksdag pinpointed nine areas it thought merited special protection. Since then a further 20 parks have joined the fray, and there are more on the way.

Here we take a closer look at the best of what Sweden has to offer in terms of natural beauty. Enjoy!

Abisko, in the far north, is the starting point of Sweden's most famous hiking trail, the Kungsleden, and is one of the sunniest places in the country. Blå Jungfrun (the blue virgin) is a magnificent island in the Baltic Sea off the coast of Kalmar. Just look at it! Dalby Söderskog is a flower-strewn deciduous forest in southern Sweden. Some say it's at its best at this time of the year. Gotska Sandön is the most isolated island in the Baltic Sea – and it's utterly glorious. Kosterhavet is Sweden's first marine national park and home to some 12,000 underwater species. The human population explodes during the summer because it's just a stunning place to visit. Sarek is a glacial landscape that boasts six of Sweden's highest mountains. Sweden's indigenous Sami have lived here since time immemorial. If it doesn't take your breath away you should go see a doctor.

Skuleskogen, an ancient forest on Sweden's High Coast, is one of the world's prime examples of land uplift. It's still rising at a rate of nearly one centimetre per year, and it's extraordinarily easy on the eye. Tyresta has some of the finest unspoiled woodland south of the vast mountainous regions of the north. What's more, it's an easy day trip from Stockholm. And honestly, the others are just as impressive. Time to start planning a visit!