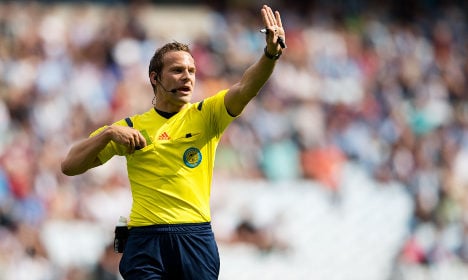 Swedish referees could soon be reaching for a green card. Photo: Andreas Hillergren/TT

Arguments with the referee, shouting, and confrontations with other players are a common sight in professional football these days. And it seems the youth game isn’t immune, with kids trying to imitate the behaviour they see from their idols on TV.

It’s for that reason that the Stockholm Football Association will introduce a green card in the capital’s biggest youth football tournament this summer. The card won’t be used as punishment, but rather, it will reward youngsters for good behaviour on the pitch in an effort to encourage them to adhere to fair play.

“Things like kids talking back to referees and disputing decisions are spreading,” Stockholm Football Asssociation head Björn Eriksson told The Local. “It happens among the leaders and the parents too. We want to strike a blow against that, and promote fair play. We think that it is good to reward positive behaviour rather than just punish bad behaviour, which has been done for so long with the red and yellow cards,” he added.

Instead of being handed out by the referee, the green card will be awarded at the end of a match by each of the head coaches to a player on the opposition team. A total of 70,000 green cards across 35,000 youth football matches will be dealt out during the summer season. The initiative isn't only designed to change how the players themselves behave, but also leaders and perhaps even over-zealous parents on the side-lines.

“We hope to start a discussion between the kids, parents, and their team leaders. If there is the possibility of a kid gaining a green card, perhaps it will deter people from shouting from the side of the pitch,” Eriksson explained.

The Stockholm FA boss also thinks the move is necessary because of a propensity to imitate poor behaviour shown by adult footballers. “It’s not unusual to see senior players shouting, complaining to the referee. That’s the standard the kids see too. We’re choosing to work on what we can affect, hope it becomes a good routine, then take it from there,” he noted.

The new card will make its debut in the St Erik’s Cup (‘S:t Eriks-Cupen’), a summer youth tournament in the Swedish capital that will involve 4,940 different teams. And if Eriksson has his way, the use of the card won’t stop there. The idea is that it can be used across Sweden – including at senior level. That may sound fanciful, but it wouldn't be the first time that such a change has occurred, with green cards for fair play already being trialled in Italian football's second tier, Serie B.

“I’m not entirely sure if this would work in the Allsvenskan, but we hope so,” Eriksson said. “Maybe in a few years. The idea is to change a culture.”