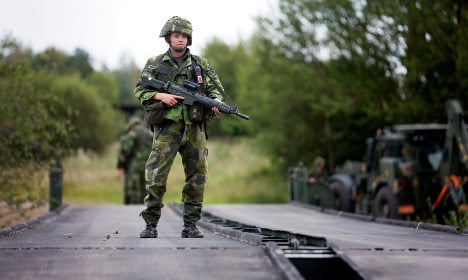 Sweden last year allocated one billion kronor ($120 million) to rebuilding part of Gotland's old Cold War defence, including posting hundreds of soldiers on the island by 2018 and setting up a new garrison.

But one of Sweden's top defence experts told a radio broadcaster on Monday that it will have little effect.

“To begin with, they can't defend the whole of Gotland even one bit. We're talking about a single place, Visby airport or the harbour at Slite or something like that,” Karlis Neretnieks, former head of the island's now-scrapped regiment and principal of the National Defence University, told Swedish Radio.

Neither artillery nor air force troops are being moved to Gotland, which means that in the event of an attack they would have to be transported from the mainland to the island, around 100 kilometres off Sweden's eastern coast.

“You can defend a single place [on Gotland] in the short or long term. That it would be enough to supply troops to Gotland, that's not the case. All deliveries we would try to do in such a situation, they would also be fought,” said Neretnieks.

Defence Minister Peter Hultqvist of the Social Democrat-led coalition government told Swedish Radio that he would not rule out boosting the island's defence even further.

“The battle group when it is complete could constitute something that raises the threshold, which makes it more difficult for a potential attacker. And that also leads to us being better prepared on Gotland. So I believe that this is an important investment,” he said.

“But if this is the end point, that's too early to tell. But I think that this issue is going to be very relevant next time we revaluate military defence spending on Gotland,” added Hultqvist.

READ ALSO: How do Gotlanders feel about the defence debate?

The picturesque Baltic island, home to some 50,000 people and a popular holiday destination among Swedes, has been at the centre of the Scandinavian military debate in the past few years, as fears grow of what is perceived to be an increasingly aggressive Russia, claims the latter vehemently denies.

Last year a security expert claimed that 33,000 Russian soldiers rehearsed a military takeover of the Baltic Sea area in the spring, including practising the seizure of Gotland, Danish island Bornholm and Finland's Swedish-speaking Åland island.