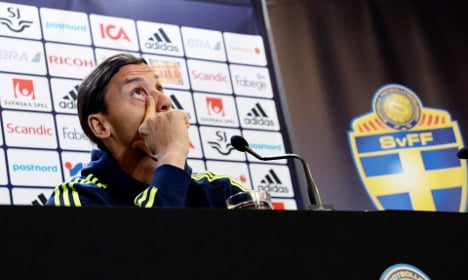 France has said it will deploy more than 90,000 police and security guards for Euro 2016, vowing to do “everything possible to avoid a terrorist attack” similar to November's terror killings in Paris.

And one of the tournament's main stars said on Wednesday that he had faith in their work.

“You see military guys walking around in the streets and ahead of these playoffs I know that they have stepped it up property because you don't want something like that to happen. Security will be in place,” Ibrahimovic told Swedish and international media at a morning press conference.

But the footballer added a plea of his own.

“Please God, don't let anything happen. Let people enjoy football. Let the players enjoy playing football. And even those watching on TV, let them enjoy it. I hope everything will be pure enjoyment,” he said.

The US is among the countries that have warned its citizens of the risks in France this summer. But the 34-year-old Swede, who is one of the world's best-paid footballers, said he did not fear for his own safety.

“Carpe diem, you only live once. I have to live my life, even if I'm in the situation I am. But it's nothing I think about and nothing you should think about. You should enjoy your life and have fun before it all ends. I'm absolutely not afraid,” he said.

He made the comments at a press conference in Båstad, southern Sweden, where he and the national team are training for the Euro 2016.

However, much to the disappointment of reporters, he did not offer any hints about his future career after leaving Paris Saint-Germain at the end of this season.

It has been rumoured that he is set to sign for Manchester United, LA Galaxy and a long list of Italian teams – even Malmö FF in Sweden, where he started his career. But the latter is not going to happen, he said.

“I'm still not interested. I'm too good for Allsvenskan,” he said about the top Swedish league.

Nor would he comment on speculation that he is quitting the national team after the summer. But responding to a question about whether or not he would be playing football next season, he sounded more dejected than on previous occasions, simply saying: “I hope so, I hope so.”

However he cheekily added about the rumours: “I want you to continue to write your stories to entertain me, because I want to hear who can create the best story.”