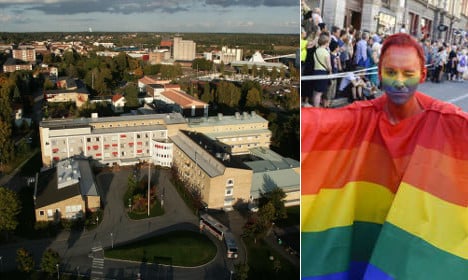 Enköping hospital in central Sweden was awarded the certification at a ceremony on Wednesday, after a three-year process which has seen all its 500 employees complete a 20-hour course on LGBTQ (lesbian, gay, bisexual, transgender and queer) rights.

“This is an important signal which shows that in operations run by the county council, everyone is welcome, no matter who you are,” Vivianne Macdisi, head of the hospital administrative board, said in a statement.

Sweden has been sliding down Europe's gay-friendly rankings in recent years, dropping from fourth to twelfth place in a key survey earlier this spring.

However, it still enjoys a global reputation for tolerance and gender equality and the country's campaign organization for gay and transgender rights, RFSL, has been handing out LGBTQ certifications for years.

A spokesperson told The Local on Wednesday that it is the first time a Swedish hospital has been awarded the certification, and they believe Enköping is the first hospital globally to receive such a stamp of approval.

“There are different certifications all over the world, and different LGBTQ associations. But this one is unique because it consists of both a training course as well as a process where the organization undergoes an internal process to work systematically on these issues,” said RFSL officer Pär Wiktorsson.

The total cost of the process for Enköping's hospital lands at 1.5 million kronor ($185,000) and it involves learning about different terms, the history of gay and transgender rights and discrimination legislation in Sweden.

“We aren't saying that all staff members will always address LGBTQ people the way they want to be addressed, but the certification is important because it sends a signal that the organization wants to work on these issues,” said Wiktorsson.