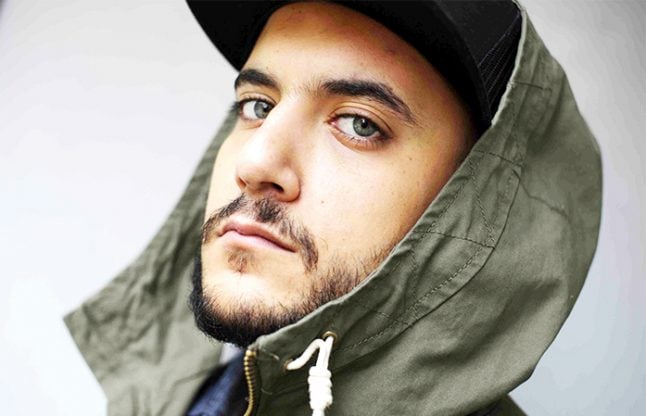 Harara has been in Sweden for three years, and since 2015, he has been working on a programme to bring music into conflict areas.

“The aim is to build a musical society in Gaza over the next four years. I’m responsible for the project, forming the training scheme, choosing the music teachers and overseeing all the other processes,” he explains.

The project, funded by the Post Code Lottery and run by Riksteatern, also offers support to newcomers in Sweden, and started a year ago in Gothenburg, Karlstad and Stockholm.

“The plan is to turn their stories into lyrics for songs. We meet newcomers and socialize with them –  to make them feel comfortable and so we can hear their stories, which might be a relief for them as well. At the end, they sing their own stories.”

Harara also hopes to take the project to refugee camps in the future, setting up mini-studios in the camps, “where refugee stories would be spread throughout the world – through music.”

He knows first hand how music can be a powerful outlet for those who have survived conflict. Growing up in Gaza after moving there from Yemen as a child, Harara remembers when rap music first came to the territory. After listening to rap groups including the Palestinian Rappers and RFM, he started out as an amateur rapper in 2003, slowly making a name for himself locally. Harara continued his rap career after a two-year break during which he joined the military service.

“After joining the military, I felt like I became more politically influenced – especially after many of my friends died. Most of my songs talked about occupation (the Israeli and Hamas occupations), myths, and the negative traditions of society.”

In the middle of 2008, Harara began to work professionally, forming a band called the Palestinian Unit along with six other musicians. But as they became more well known, this brought its own set of problems.

The group founded Gaza’s first rap school – but it was closed down by the Gaza government, who confiscated the group’s instruments and equipment.

Then, not long before war broke out in 2009, the Palestinian Unit organized a concert in cooperation with the UN, called ‘Gaza sings for peace’.

“Shortly after the concert, I was in the venue sleeping on a chair, when two armed teenagers from the al Qassam battalion woke me up,” the musician recalls. “They kept asking me questions for around 15 minutes, about me, the concert and what I did generally. While we were talking, a Jeep approached us and stopped, then three police-like men came out of it, headed toward me and started asking questions.”

The men pushed Harara into their car, not even allowing him to make a phone call.

“I had a bracelet over my wrist featuring our band – I tried to hide it, but they saw it and started shouting at me: 'It’s shameful for a man to wear a bracelet!'”

“I didn’t know where we were going. I thought they might shoot me to deter others from singing; this fear gripped my heart. But suddenly, I realized we were entering a police station. It felt like heaven, because at least I knew where they were taking me.”

Harara was kept in custody for a day as the police questioned him. “They wanted to know why I rapped, and who I was cooperating with. Then they gave me a warning and I was released on parole.”

Not even this frightening experience put Harara off writing and performing, but he had to do it all in secret.

“There were no public events anymore, because I feared for my life. Rapping was a ‘problem’ and so was prohibited. But I remained active, writing lyrics, singing and cooperating with other artists secretly using the internet.”

He worked in this way until 2012, when he had the opportunity to participate in the month-long Fimu music festival in Berlot, France – his first event abroad. “In fact, that was the first time when I felt like I was respected for being a musician,” says the rapper.

In 2013, he received an offer to participate in another foreign event with a friend; a two-month cultural event for children in Denmark. When it came to an end, his friend wanted to go back to Palestine – but Harara stayed in Denmark.

“The moment when we said ‘bye’ in the airport felt like I was breaking free – as if I was starting a new life.”

After a few months, this new life took him to Gothenburg, where Harara was a 'guest writer' with ICORN (The International Cities of Refuge Network, an organization offering shelter to artists at risk). As a guest writer, he received a scholarship, but the transition was difficult.

“When I first arrived here, I went through an extreme six months of depression. I felt bad because although I had enough money and a place to live, I felt deeply melancholic. There were two women from the project who took care of me. These women rescued me.”

“After overcoming my depression, I started to build friendships, getting to know more about my new city, the activities and different workshops that happen here.”

Harara worked on improving his skills, and was able to study at a music school in Angered for a year, before beginning on his current project, bringing music to conflict areas.

Now, he is happy to be in Sweden. “It’s a great country, I’m lucky to be here,” says the 29-year-old. “There are problems, such as racism, but Sweden is one of the world’s best countries to live in. Still, if you want to have an impact, if you want to be special, you need to work very hard.”

But Harara is determined to put in the work, saying: “I didn’t come here to waste my time – chances do not come around twice.”