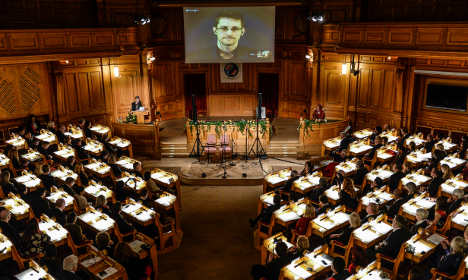 The Right Livelihood Award, often referred to as Sweden's alternative Nobel Prize, has been presented in the Swedish parliament since 1985 – with the exception of 2014 when it was banned from official premises after giving the award to former US intelligence officer Snowden, holed up in Russia for leaking secret documents.

So it stirred quite a bit of debate when the speaker of parliament, Urban Ahlin of the centre-left Social Democrats, decided to cancel the annual awards tradition at the end of last month, telling Swedish public broadcaster SVT at the time that “parliament is not a conference centre for external actors”.

Right Livelihood Foundation director Ole von Uexkull accused him of blocking the ceremony because of some of its politically controversial laureates, saying in a statement that “if the ceremony can no longer be held in parliament it spells a drastic worsening of the support that Sweden can easily offer to some of the world's most important actors for change in society”.

Särla, a society representing the foundation in parliament, and consisting of members of all parties apart from the far-right Sweden Democrats, submitted a letter to the parliament's administrative board to throw out the decision. But on Wednesday Ahlin confirmed that the board had upheld his decision after a meeting.

“We discussed the letter on the parliamentary board and the regulations. I also reported on consultations I have held with group leaders and then the letter was archived,” Ahlin told the TT news agency.

The foundation hit out at the decision on Wednesday afternoon. In a press statement emailed to The Local it said one of its representatives, Cecilia Magnusson of the centre-right Moderate Party, who serves as a deputy member of the parliamentary board, had not been allowed to attend Wednesday's meeting on the grounds that she is not an ordinary member.

“It is shocking,” von Uexkull described Magnusson being denied a vote. But he added: “The speaker cannot indefinitely ignore the massive support that there is among members of parliament. I assume that the awards ceremony will be held in parliament this year just as it has the past 30 years.”

They were introduced “to honour and support those offering practical and exemplary answers to the most urgent challenges facing us today”, according to the Right Livelihood Award Foundation.

A total of 162 people and organizations from 67 different countries working for sustainable development, human rights and peace have so far received the award, including Congolese gynecologist Denis Mukwege and Swedish children's novellist Astrid Lindgren.