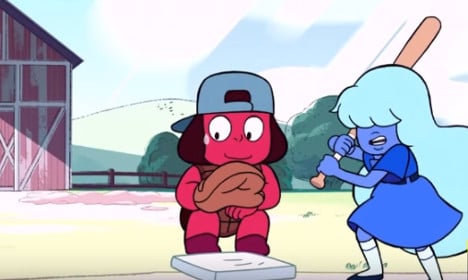 The petition claims that dialogue from the original English language version of the ‘Steven Universe’ episode ‘Hit the Diamond’ was changed in translation, in order to lessen the romantic connotations of a relationship between female characters Ruby and Sapphire.

The petition writers call the alleged changes “an active choice to censor the relationship that Ruby and Sapphire have,” adding that “this happens in 2016 in Sweden, a country that is known worldwide for being progressive in its views and accepting” of lesbian, gay, bisexual and transgender people.

The petition also demands that Cartoon Network should “promise in writing to never again censor Ruby and Sapphire’s relationship through translation or otherwise”. It has been signed over 1200 times by Friday afternoon.

In response, Cartoon Network’s parent company Turner explained that changes in the versions of its shows broadcast in Sweden from the American originals are due to differences in ratings systems between networks in the two countries.

“Cartoon Network often airs edited versions of programmes from the American originals due to a number of factors, including the fact that US networks use different ratings systems,” Turner press spokesperson Emma Thelander wrote in a statement to The Local.

“As a channel we celebrate diversity, which can be seen in many of our programmes and characters. We do not aim in any way to censor scenes where same-sex relationships are shown and we are proud that our programmes have many healthy role models for children to relate to,” the statement concluded.

This is not the first time that a European branch of Cartoon Network has been criticized for altering the depiction of same sex relationships in 'Steven Universe'. In January, close-ups showing two different female characters dancing romantically were removed from the UK version of the show. Cartoon Network UK defended the decision at the time, again citing differences between European and American ratings systems.

Sweden is considered one of the most liberal countries in the world regarding gay rights, but in recent years it has been sliding down Europe’s gay-friendly rankings.

In May, the Nordic nation dropped from fourth to 12th place in a review of how LGBTI people experience human rights across the continent, which was carried out by campaign group ILGA-Europe.