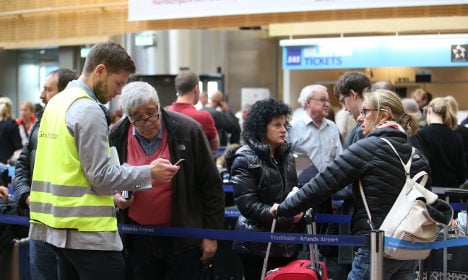 “We have done all that's in our power to avoid a strike, but we have unfortunately been unable to come to an agreement. Our main priority now is to take care of our customers and (we) are working vigilantly to do everything we can to assist passengers affected,” SAS spokeswoman Karin Nyman said in a
statement.

SAS flights flown by Danish and Norwegian pilots were operating as normal throughout the weekend, she added.

Sunday's flight cancellations were expected to affect another 26,000 travellers.

At Stockholm's Arlanda airport, passengers hoping to rebook their cancelled flights stood in long queues at the SAS ticket counters.

Travellers Chun Yang, Milli Chiang and Jimmy Hsu from Taiwan told news agency TT they were surprised to learn of the strike when they landed in Stockholm en route to Finland.

“Now we have to try to organise our trip to Finland ourselves, our travel insurance from Taiwan won't cover the cost,” Chun Yang said after five hours in line and still far from the head of the queue.

Anna Antell, who was to fly to Croatia with her husband and two children, had no sympathy for the striking pilots.

“They already have good salaries,” she said.

The walkout comes during a peak travel season, and has hit charter groups hard.

“Many flights are of course fully booked, so the chances of rebooking a flight are not the best. We're doing what we can to help in the best way possible and find alternatives for our travellers,” Nyman told TT.

The strike broke out Friday at 6:00 pm (1600 GMT) after the Swedish pilots union SPF rejected the mediators' proposal of a 2.2 percent wage increase, insisting instead on a 3.5 percent increase.

The employers' organisation however said that the pilots' overall demands, including employment contracts offering greater job security, would entail a 10 percent cost increase.

“We want our employees to feel secure in their jobs, but the pilots' wage demands are just too high. We can't afford to pay that much given the competitive (air travel) market,” SAS chief executive Rickard Gustafson said
Friday before the strike..

No date has been set yet for new negotiations.