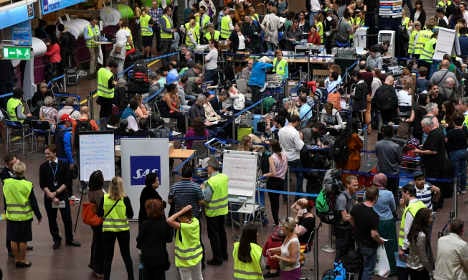 Around 25,500 passengers are due to be affected by the cancellation of 240 departures on Tuesday, though the airline insists it is working hard to try and help travellers reach their destinations.

“We have committed all available resources and will do everything we can to help,” SAS press officer Anna Kansell told news agency TT.

And it seems an end to the industrial action is no nearer, with SAS admitting on Tuesday morning that there is no new information on negotiations with the Swedish pilots’ union.

“Nothing new has happened, and we have no new negotiations scheduled. But we are prepared to negotiate at any time,” Kansell explained.

The strike began last Friday at 6pm, after the union rejected a proposed 2.2 percent wage increase, insisting on a hike of 3.5 percent. Attempts by a mediator to broker a deal failed on Sunday.

On Monday, talks stalled again, resulting in the cancelation of flights between Stockholm and Athens, Brussels, Dublin, Frankfurt, Geneva, London and Paris

Details of the extent of the dispute between the employer and union emerged later that day, with the two parties apparently even unable to agree on the specifics of how much the lowest-paid pilots earn.

On Tuesday, SAS advised passengers travelling to or from Sweden to check social media and their official website for the latest information. They have also warned anyone considering making the journey out to Stockholm’s Arlanda airport in search of quicker assistance not to do so.

Financial analysts estimate that the strike could be costing the airline at least $1.2 million a day, with the potential losses even greater if customers were to lose confidence in the company’s dependability as a consequence of cancellations.