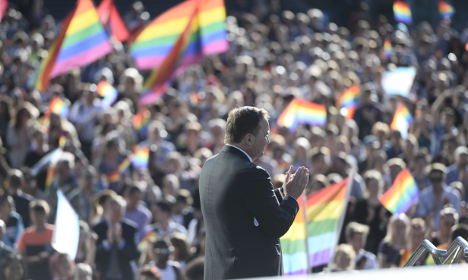 Stefan Löfven at a Stockholm rally in support of the Orlando victims. Photo: Henrik Montgomery/TT

Löfven made his intention to participate known at the start of the Riksdag’s party leaders debate on Wednesday morning, the final such debate before parliament breaks for summer.

“This violent extremism is driven by an implacable hatred against LGBT people, against women, and against all of our freedom,” he told the parliament.

The Social Democrat leader then said he plans on participating in Stockholm Pride in order to show his support for LGBT rights and to celebrate an open society.

Löfven's comments follow a speech he made the previous day at a rally held in Stockholm in support of the Orlando victims.

“I am here to express Sweden's respect, solidarity, and sorrow for all those who lost their lives in Orlando,” he told a crowd of more than 1,000 people on Tuesday evening.

Löfven did not participate in last year’s edition of Stockholm Pride, but his predecessor, then Moderate leader Fredrik Reinfeldt, became the first sitting Prime Minister to do so when he walked with the parade in 2014.

The current Prime Minister’s announcement comes on the same day that a local politician from the Christian Democrats resigned as party chairman for the Alvesta municipality, after it emerged that he had made a post on social media which likened Pride to Isis.

“You have the right to fly whichever flag you want if it is Saudi Arabia’s green with a sword of decapitation, the Isis flag, or Pride. I can’t respect what these flags represent,” then Alvesta municipality chairman Kauko Antbacke wrote. In another post he also wrote that “Pride does not belong to our culture”.

The Christian Democrats told news agency TT that they did not support his statements, but that the decision to quit was Antbacke’s own.