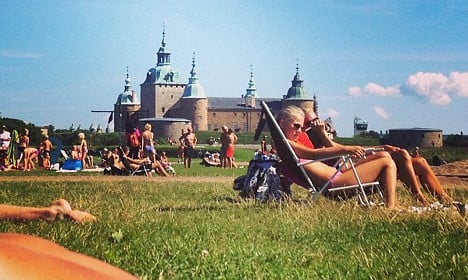 Kalmar, the pretty city on Sweden’s south-east coast, came out on top when travel site Reseguiden counted the 37,000 votes in its annual poll. So, what makes it such a special place when the sun shines?

Not only does central Kalmar boast a wonderful beach – it also has arguably the best name of any beach, anywhere. Kattrumpan (The cat’s bottom) shares its cheeky moniker with a small city district and is popular among youngsters.

If that’s not your scene, the city is awash with amazing beaches, so much so that there are two reserved for naturists and one for dogs. Woof! Driving across the Öland bridge is awe-inspiring. And on the other side of that bridge is Öland itself, a beautiful Baltic island and one of Sweden’s most popular summer getaways.

And when you’ve lazed away a day on one of Öland’s seemingly endless sandy beaches, you can cross back over the bridge and there, again, is Kalmar. What’s not to love?

The six-kilometre bridge was Europe’s longest when unveiled by King Carl XVI Gustaf in 1972. On September 30th that year, 50,000 people rocked up for the opening and tailbacks stretched from the mainland to Öland. If you’re in town you simply can’t miss Kalmar’s most iconic landmark. Back in 1397 the Kalmar Union was signed here, bringing the Nordic nations together under a ginormous three million square kilometre umbrella.

It survived for more than 120 years, which is a good innings for an umbrella. But in 1523 it fell apart and the lands were once more covered in snow. Except during the summer, when Kalmar, then as now, was the place to be.

The castle took on its renaissance look in the late 16th century, and it remains the most impeccably preserved castle of its kind in Sweden.

Iron man, sand sculptures, that kid Emil out of the Astrid Lindgren books

Top tip: Sip on a glass of whatever you’re having at the central Larmtorget square and watch the rest of the world exert itself unnecessarily.

You can maybe, at a stretch, walk a few steps to the beach for the sand sculpture festival in July, then there’s the pleasant summer bustle of the city festival in August.

If you like Astrid Lindgren’s books for children – and let’s face it, you do – there’s an exhibition about the Emil character at the Castle.

Then, why not look on with awe at the raw power of the Iron Man triathlon, and hey presto, you’ve got yourself a smashing summer. By the beach at Kalmarsundsbadet you’ll find the perfect place for a quick kiss. It’s the pusshållplats, the kiss stop, a play on the busshållplats, or bus stop. And not the kisshållplats, because that would be the pee stop.

Anyway, it’s cute. Or nauseating, depending on your mood and inclination. That’s all well and good, but where am I going to eat?

Well, where to start?! Kalmar knows how to feed its visitors, that’s for sure, and we could go on a bit. But we’ll settle for three sure-fire hits: Postgatan, Slottsrestaurangen and Gröna Stugan.

If you’re not satisfied with any of those we offer a money-back guarantee. Which is not worth much because we’re a free website. (Subliminal message: Support our sponsors). But seriously, you won’t be disappointed.