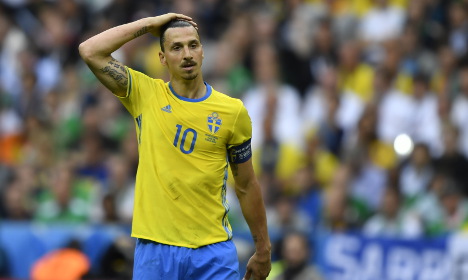 Ibrahimovic wasn't at his best in Sweden's opener against Ireland. Photo: Anders Wiklund/TT

And though he terrorized opposition defences in Serie A for seven seasons, Zlatan Ibrahimovic will face stiff resistance to his efforts to rescue his country's Euro 2016 campaign against Italy on Friday.

“Zlatan can put a whole team under pressure just by himself, but we have to concentrate on our own game … and try to limit their strengths,” Lazio winger Antonio Candreva said.

Ibrahimovic failed to sparkle in the draw against Ireland, despite playing a decisive role in Ciaran Clark's late own goal, and the Swedes are now under pressure ahead of Friday's Group E clash in Toulouse.

A defeat would leave the Scandinavians needing to beat Belgium, ranked number two in the world, in their last group game and hoping they place among the four best third-placed group finishers to sneak into the last 16.

“Even though we managed to come back and equalize, I am disappointed. We will need to play at 300 percent to get through,” he said after their opening draw.

Sweden will really need the talents of Ibrahimovic, their talisman for many seasons.

One of the most feared strikers in the world, his ability to produce moments of goalscoring magic have delighted fans for the past decade.

He hit 11 goals for Sweden in their qualifying campaign, only two shy of German Robert Lewandowski, and with the pressure now on the towering striker, Italy coach Antonio Conte has sounded a warning.

“I like Ibra a lot, above all when he plays for the national team. He's got plenty of character, and he leads by example,” said the Italy handler.

“He's become even stronger over the past few years, and he's still progressing. He's a very strong player who can destabilize a whole team.”

Friday's game would be the perfect occasion for 'Ibra' to defy his detractors, and Italy forward Candreva said he does not expect the Swedes to make it easy for his nation.

“Sweden struggled for 60 minutes against Ireland but against us they'll be hoping to play the game of their lives,” he said. “It will be a hard match.”