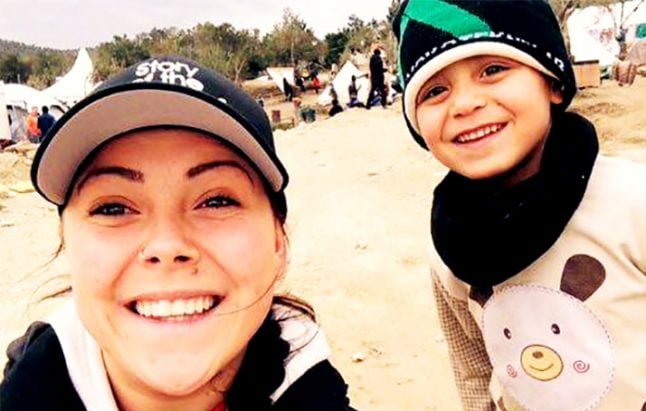 Nilsson, 23, first began volunteering with refugees in Greece, where she was living when the refugee crisis broke out, and in August 2015, she decided to leave Greece to help in her native country.

“I think it’s our duty to help each other. It’s very important to do something for the community, and stop being passive, watching from a distance,” she says.

Nilsson went to Malmö’s central train station, where she began handing out food and water and helping people in any way she could. She worked independently; having previously volunteered with larger organizations, she had become dissatisfied with the way many of them worked.

“I don't think they help that much. In Greece, volunteers came for a few hours and didn’t really do anything – they didn’t even hand out food or water,” she says.

Since she began, her group of three volunteers has grown to five: Sara Soleymanpur, Hanan Sadek, Johanna Nilsson, Idun Owman and Wilma Pierre, aged between 15 and 31. They help in two ways: by giving on-the-ground, immediate assistance to refugees, and by publishing the stories of those they meet on Facebook so that Swedes can get to know them and understand their situation better.

“It’s hard to express the misery we saw; you can’t just concentrate on any one story because there are so many. But I remember one family who had a tiny girl with scars all over her legs, from walking for many hours. They asked us to help and find her new shoes, but when we took off the old ones, we found her feet were red, swollen and crammed with worms.”

Nilsson came up with the idea for a Facebook group after seeing negative comments about the influx of refugees on social media, something she considered “unacceptable”.

“My colleagues and I wanted to show that the refugees aren’t just numbers; they are people with names, families, stories and dreams,” she says.

“I wanted the Swedes who are sitting at home and watching TV to learn about these people and to be motivated to do something. It could just as easily be you in their situation; you are just lucky you were born in this great country.”

“At times, we felt like there was hatred towards the refugees and those who were trying to help them,” she adds.

Nilsson felt that, particularly at the start, volunteers from larger organizations and some police officers treated her group with “suspicion”, and she saw one member of anti-immigration political party Sweden Democrats taking pictures and laughing at them.

Nonetheless, their Facebook group, ‘Story of the refugees’, now has close to 6,000 followers and she hopes that the group will be able to become a certified NGO. As well as helping new arrivals at the central station, the women collected money to buy school supplies for students, and organized a Christmas party for around 300 people.

This summer, fewer refugees are entering Sweden than last year, but Nilsson knows that doesn't mean her job is over.

“I am devoted to volunteering, and it's very important for us that we continue. Now it’s harder than before,” she explains. “There are many people who feel isolated within the society, and our task is to welcome them and help them interact. And there are still many Swedes who might be suspicious or even afraid to interact with refugees.”

One example is the fact that many who have applied for asylum as minors seem to be older than they say, something which has provoked controversy in Swedish media – but Nilsson says Swedes shouldn't be so quick to judge.

“These people still need help,” she says. “They’ve come all the way here, so they probably have their own reasons, their own harsh reality.

“I think that through our work, we might be slightly influencing the Swedes, changing peoples’ views. Personally, I have changed dramatically since I started helping the newcomers.

“But helping refugees with food, water and maybe shelter is the easy task. The hard part is helping them to overcome their trauma.”

Currently, the group works with children to help them fill their time with activities, but Nilsson says they need more help in order to socialize, integrate, and deal with the psychological trauma of their experiences.

“Many have witnessed terrible events; some have seen their siblings shot and killed in front of them. We need to talk to them and help them speak out to feel safe,” she says.

Many of the refugees she has met are afraid of talking about their experiences, and do not want to speak with the media. But they often see her as a friend, and some of them call and ask to speak to her in private.

“I don’t know what to say to these people. I can’t even understand their courage,” she says. But she has one clear message for newcomers in Sweden. “I would like to say to the refugees, welcome, and that we are trying to do our best to welcome you and have you as brothers, sisters, friends and partners.”