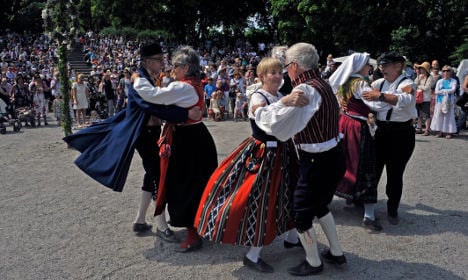 Would it look something like this? Photo: Hasse Holmberg/TT

“Yes, why not?” said Mattias Karlsson when quizzed by the Sydsvenskan newspaper.

He spoke to the southern regional daily ahead of the party presenting its proposal for how to combat crime and poverty in some of Sweden's most segregated suburbs. Its leader Jimmie Åkesson is set to take the stage later at annual politics festival Almedalen Week which is under way on the island of Gotland.

“We want to spread the Swedish cultural heritage in the suburbs. Increase support for various cultural associations. It could be theatre companies performing plays about Swedish history. Or folk dancers,” said Karlsson, who was also interim party leader during Åkesson's sick leave in 2014 and 2015.

But he later downplayed the suggestion when speaking to The Local.

“It was one of maybe 10 to 15 things I mentioned in the interview. I also talked about music, art, the cultural heritage and so on (…) everything that's significant for understanding the culture around you,” he said.

He added it was important to create a sense of belonging among people living in segregated areas.

“A good place to start is this: one part of social exclusion is that many youths of a non-Swedish background don't feel quite at home in their own culture, but also not in the Swedish culture, whereas Swedes have got in touch with their history through for example their older relatives.” Åkesson, meanwhile, said on Thursday that his party wanted to make it possible to impose a state of emergency and curfews, as well as creating a special task force within the police for certain problem areas.

“Cars burning, schools burning, stone throwing, rioting. The police are talking about 53 areas where there's narcotics trade and general insecurity. It should not be like that, obviously,” he told a press conference in Visby, Gotland.

He said the party, known for its anti-immigration stance, would focus on four areas: law and order, strengthening Swedish culture and values, boosting socio-economics and improving the physical environment in the suburbs.

Last month Swedish police were granted permission to put up security cameras in Stockholm suburbs Rinkeby and Tensta in an effort to crack down on crime, after voicing concern about criminal activity.

It followed a series of stone throwing incidents at police. And earlier this year an Australian TV station released a clip showing their crew being attacked while reporting on a story about the refugee crisis.

Social Democrat Prime Minister Stefan Löfven has vowed to clamp down on attacks on police officers, saying that Sweden needs to work to halt widening gaps between poorer and more well-off suburbs.

“We have too much inequality and segregation. Sweden should not be characterized by divides, but by community,” he told the Aftonbladet tabloid in June.

The Sweden Democrats, which were elected to parliament in 2014 with just below 13 percent of the vote, have been polling at 17.3 percent lately, according to the latest edition of the country's largest party survey by Statistics Sweden, down by 4.4 percent from November.