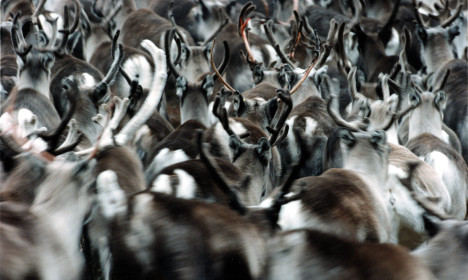 A file photo of a Sami reindeer herd in Sweden. Photo: Anders Wiklund/TT

The dispute between Statkraft SCA Vind AB (SSVAB), which runs wind farms in the northern Västernorrland and Jämtland regions, and Sami village Jijnjevaerie had been going on for several years, but an agreement has now been reached.

The two parties chose not to reveal any economic details from the deal, which will regulate the actions SSVAB should take in order to reduce its impact on reindeer herding in the area.

“We have a sense of grief over the loss of land, but it is nice that we have managed to reach an agreement with SSVAB over compensation for the costs we have,” Jijnjevaerie chairperson Marianne Persson wrote in a statement.

Sami villages are cooperatives that organize reindeer herding within specific geographical areas. There are 51 different Sami villages in Sweden.

The villages have been involved in other disputes over operations on their land in the past. In March 2016, the Sami village of Girjas won a long-running legal battle with the Swedish state over fishing and hunting rights on its territory.

In October 2014 meanwhile, authorities in Norrbotten in northern Sweden rejected plans to allow iron ore mining in Kallak, near Jokkmokk, due to concerns over the impact on reindeer grazing in the area.

The indigenous Sami people have lived in Scandinavia since the last Ice Age, more than 10,000 years ago.

SSVAB is 60 percent owned by the Norwegian state through Statkraft, while the rest of the wind farm operator is owned by Swedish consumer goods company SCA.