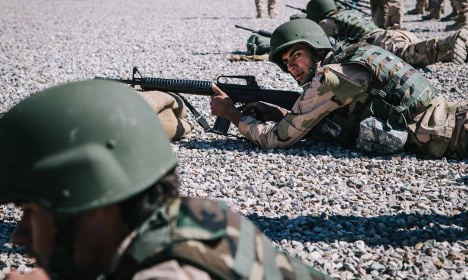 Defence Minister Peter Hultqvist told Swedish radio's current affairs show Ekot on Wednesday that Sweden had been asked to increase its troops in Iraq from 35 to 70 soldiers.

“In my view it is very reasonable that we extend our mission and also contribute more. Many other countries have done that and we should too,” he said.

The Swedish troops arrived in Iraq in August last year to join the anti-Isis coalition of around 60 countries. They have been helping to educate Kurdish soldiers on a range of measures, from urban warfare to healthcare and protection against chemical weapons.

Hultqvist and Foreign Minister Margot Wallström are expected to tell a summit of the coalition in Washington DC next week that Sweden is willing to step up its mission.

Sweden has also been asked to contribute a medical unit. Hultqvist would not elaborate on whether he had received other requests, but added: “Of course there are many points, but these are the ones where we see we could contribute by a decision, in that case, this autumn.”

But the Swedes' presence in Iraq is not entirely uncontroversial. Some have raised concerns that it could raise the terror threat level against the Nordic country.

Thomas Hegghammer, a terror expert at the Norwegian Defence Research Establishment, told news agency TT last year that he was worried Isis could feel more threatened on the ground, which “could motivate someone to carry out violent acts to protest”.

Sweden's security police, Säpo, believes as many as 300 Swedish nationals may have travelled to the Middle East in the past years to fight alongside Isis in Syria and Iraq. Of these, 45 are understood to have died in the region and 135 returned to Sweden.