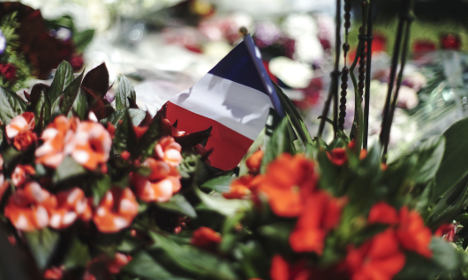 LIVE: Follow The Local France for the latest on the Nice attack

Kristian Julius, a Swedish tourist who was caught up in the Nice attacks, told The Local how he narrowly escaped being injured by the vehicle.

“We got off our bus near the Hotel Negresco and started walking down the promenade. For no particular reason I turned around and saw a truck that was veering backwards and forwards along the promenade, aiming at people.”

“It then came directly at us, so we ran towards the street. If I hadn’t turned around when I did, I would have been crushed.”

The Swede said he was almost instantly aware that he was watching a terror attack unfold.

“I knew within a couple of seconds this was a terror attack. The truck was completely dark, there were no lights on, so you couldn’t see the driver. A man threw himself at the cab and tried to get inside, but he was thrown off.”

“We saw two people who had been killed, an old woman whose leg was torn off at the knee. It was the old people and children who couldn’t get away quickly enough who were – it’s so cowardly.”

The eyewitness detailed the panic that took hold in the aftermath of the attack, and the atmosphere in Nice the following day.

“We then ran towards the beach, but the bars had locked their gates, so we climbed over the fence. The beach was full of people, but then for some reason panic broke out – someone must have thought something was happening there – and everyone started fleeing towards town again,”

“Today everything is quiet. There’s hardly a soul on the beach. The shock is starting to wear off – we’re just trying to carry on as normal.” Isabelle Johansson, 20, from Stockholm, had just sat down at a restaurant near the palm-lined Promenade des Anglais to celebrate her mum's birthday when she heard screams.

“Then we see a white truck go straight through the crowd,” she told Swedish newswire TT. “People started running everywhere and were completely crazy. We had been there two minutes earlier at the beach.”

Around 84 people are believed to have been killed after the van rammed into the crowd at the French city's annual July 14th national day celebrations in what has been described as an “attack” by local officials.

The driver was shot dead, said government officials, confirming that counter-terrorist investigators had been brought in to head the probe.

“It is terrible what is being reported from Nice. This is an attack on innocent people and it is also an attack on our open and democratic society. I feel for all of France tonight and think of the victims and their families and relatives,” he said in a written statement.

“The government is closely monitoring the situation. We are keeping informed about the extent of the attack and how Swedes at the scene are affected by events,” added Löfven.

There were no immediate reports of Swedish victims, but Sweden's foreign ministry (Utrikesdepartementet) urged nationals based in southern France to get in touch, either with the ministry itself, friends or family at home.

And at 3.30pm on Friday, the Swedish foreign ministry told The Local that they still had no confirmation that any Swedes were missing in the area.

“We have received calls from relatives telling us that there are Swedes in Nice, but we don’t have any details on whether anyone is missing, only that they haven’t been in touch with their relatives,” UD press officer Anna Ekberg said.

“There could be various reasons for why they haven’t contacted their relatives. We have no information saying that anyone is injured or dead at this moment,” she added.

Yesterday's incident came just hours after France announced that a state of emergency declared after last November's attacks would come to an end later this month.

Sweden raised its own terror threat level at the end of last year following the November terror attacks in Paris and a separate hunt for a suspected terrorist, arresting only a man who soon proved to be innocent. However, it was later lowered from four to three on the five-point scale (where five is the highest).