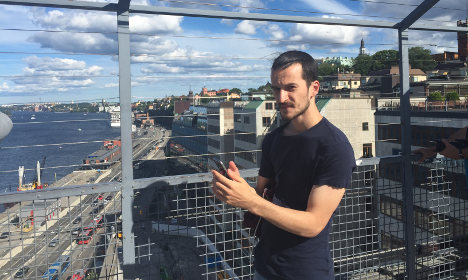 It caused a stampede in New York’s Central Park, led to Japanese tourists being stranded in a Barcelona motorway tunnel, and now, Pokémon Go is finally out in Sweden.

The app launched in the Scandinavian country last weekend, so The Local’s Lee Roden thought it was only appropriate to give it a try. The result was an occasionally bizarre, often frustrating, and at times humiliating weekend hunting Pokémon in Stockholm.

1.  The journey begins at Mosebacke

For those not already aware, Pokémon Go hides fictional creatures on a map of your local area, then uses GPS to track your movement around the map as you attempt to hunt the animals in question.

Once a Pokémon is found, the game then uses your phone’s camera to reveal it in the real world, at which point the goal is to try and catch the creature and add it to your collection.

All users see the same Pokémon in the same area, meaning the appearance of rarer types can lead to mass congregation in one spot, like what happened at Central Park. There is also the possibility of user v user battles, where caught Pokémon square-off against one another in order to score points for their owners, so unlike most computer games, interaction with the real world and other users around you is key.

My quest started just around the corner from The Local’s office on Södermalm, southern Stockholm, at Mosebacke Torg. An iconic square with a beautiful terrace that fills up quickly in the summer, as well as one of the city’s best-known nightclubs, Södra Teatern, it's a busy spot.

It was here that my first Pokémon appeared, the fire-tailed Charmander. Phone out, Poké Balls thrown, and after a few minutes getting to grip with the somewhat confusing interface, the beast was tamed. One down, 150 to go. Easy, or so I thought. 2. Up to Västerbron… and downhill from there

My foray into the game had started well enough, and as Saturday progressed and more creatures were added to my collection, I started to get confident – and notably less aware of my environment.

At Hornstulls Strand on the other end of Södermalm I was so thrilled to have caught a Squirtle that I almost forgot the embarrassment of having actively crossed a main road that was in no way part of my journey to the supermarket in order to do so. A latter success in netting weird fish creature Magikarp on Östermalm meanwhile was almost satisfying enough to offset the oddness of holding my phone up and flicking away madly while standing in the middle of a huge crowd of tourists on a busy Saturday morning. It provoked strange looks from passers-by, but catching these two was worth it. Photo: Lee Roden

My self-respect was eroding fast, but my level in the game was rising, so I soon decided to test myself in my first ever player v player gym battle. Unfortunately for me, the nearest gym (these too have to be reached physically in the real world) was at the top of Västerbron, a 600m long bridge in the south of the city that involves a fairly steep hike.

I duly grabbed a bike and cycled to the top, stopping at the point where lovers leave padlocks attached to the bridge in a tradition you've probably seen in other cities. More importantly for me, it was there that the gym was located, and my battle got under way.

In less than a minute I was comprehensively humiliated, each of my Pokémon beaten without even reducing my opponent’s first to half of its health. As if to add insult to injury, the game promptly displayed “YOU LOSE!” in capital letters, just in case I hadn't noticed.

So off I cycled into the distance, and it was all downhill from there – in more ways than one.

After regaining some confidence, I decided to try my luck again and headed for the next area of potential Pokémon activity: the garden outside of Stockholm’s City Hall (Stadshuset).

The venue of the Nobel Prize banquet and also a major tourist attraction, the latter fact led me to believe that the sheer mass of people bound to be present on a sunny July afternoon would give me the chance to meet at least one person worse at the game than I was. I never got the chance to test my theory. Perhaps the number of people passing by, phone in hand, saying things like “it’s not working” should have given it away, but it was only when I got to my destination that I discovered the game’s servers were down.

The City Hall gym was a write-off, but the server did come briefly back online for a few minutes. That was at least enough time for me to re-stock on Poké Balls, courtesy of one of the hall's statues, which I learned from my app is called “The Boy With the Fish” (Pojken Med Fisken).

One of the better quirks of the app is that it brings points of interest like the statue to your attention. In order to catch Pokémon you need Poké Balls, and in order to stock up on the balls, you need to travel to and look at landmarks and artwork in your city. Who said gaming isn’t for cultured types? With the server troubles continuing I decided to get back on my bike and head to another location, hoping the issues would be fixed by the time I arrived. When I dismounted right in the middle of Stockholm, the game had indeed come back to life, promptly informing me of several potential minions in the nearby area. I focused on one – the cat Pokémon Meowth – and started to follow its trail. There's a Pokémon behind here, in theory. Photo: Lee Roden

Unfortunately, the app decided to place the beast in question in a location that was very much off-limits: beyond the security gates behind the Swedish Parliament House. After much contemplation I decided that breaking and entering at one of the most heavily-guarded buildings in the country probably wasn’t worth it, even for Meowth, and instead followed the map to a second nearby location, on the other side of the government offices.

It was there – at the Riksplan park – that I became truly aware of just how many people were playing this thing. Everyone in my vicinity had their phone in hand, and the majority were either making the tell-tale swiping motion, or had the sound of the game’s theme music emanating from their devices. Guess what all of these people were doing? Photo: Lee Roden

After getting over the sensation that I may have been trapped in Nintendo’s own version of The Truman Show, I seized my opportunity to make a couple of catches. There was something surreal about throwing fictional balls at fictional creatures against the backdrop of Stockholm’s Royal Palace. Perhaps the King was in there trying to catch Pikachu from his window. 5. Highs and lows at the Katarina Elevator

Originally built in the 1800s, the top of the Katarina Elevator on Södermalm provides one of the best views in Stockholm, delivering a panorama of the Old Town sandwiched between Kungsholmen and the Mälaren lake on the left, and Djurgården and the beginnings of the Baltic Sea inlet on the right. Arguably the best view in Stockholm, and theoretically the sight of a Pokémon gym. Photo: Lee Roden

It wasn’t for the view that I hiked up there on Sunday however, it was for the gym. With my pride somewhat restored from Saturday’s humiliation, I climbed up the hill behind the viewpoint (the elevator is currently out of use) and walked out onto the always rickety-feeling platform until I reached my destination.

I needn’t have bothered: as soon as I had initiated my battle, the server once again crashed, seemingly still buckling under the weight of Sweden’s Pokémon enthusiasts. About as much as I got to see of the Katarina Elevator gym (left) before the servers crashed (right). Photo: Lee Roden

By now a broken man, I decided to head home and end my hunt – or so I thought. After doing an entire circle of most of central Stockholm over the course of the weekend, which involved taking in Södermalm, Kungsholmen, Östermalm and Gamla Stan, I finally came across the most famous Pokémon of all, right outside my own apartment. It was almost as if Pikachu was mocking me and my pointless journey, so I responded in the only way I could: by throwing red and white balls at his head until I eventually caught him.

After wasting three days on his app I’m not sure who the real winner was, but I claimed victory regardless.