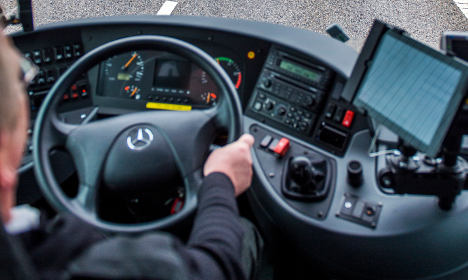 File photo of a bus driver not related to the article. Photo: Emil Langvad/TT

The man, an asylum seeker from Syria staying on Öland, an island off the east coast of Sweden, told regional newspaper Barometern, which broke the story, that the incident took place on Tuesday morning on the 6.15am bus to Borgholm.

Speaking to The Local on Wednesday, he described how a fellow asylum seeker from Afghanistan got on the bus before him, but when he next tried to board, the driver closed the door in his face.

“I saw one of our neighbours who had a car and told him what happened. He then drove me quickly to the next stop ahead, where I could again get the same bus and continue to the centre,” said the man, who wishes to be known only by his first name Muhammed.

He said it was not the first time the bus driver had refused to allow residents at the asylum centre to travel and decided to snap a picture of the man to report him. When the bus reached its next stop, the driver got up and attemped to take his own picture of Muhammed, who responded by covering his face.

Another passenger filmed the incident. The video shows the furious bus driver pulling on the man's clothes, kicking him and repeatedly hitting him on the back of his head, saying: “I hate you damn swines.”

He only stops after other passengers react.


A video of the incident, published by Barometern.

Muhammed, who fled war-torn Syria after his brothers were killed and arrived in Sweden in October, said he was left stunned by what he described as an unprovoked assault, forcing him to seek hospital care on Tuesday evening.

“I don't know why or how even that happened, I never expected this could happen to me in Sweden. This incident felt really humiliating to me, I still can't understand it. I've left Syria to avoid being beaten or killed, and I found myself being beaten in Sweden – that's shocking.”

However, he said he refused to let the experience change his overall impression of his new home.

A spokesperson from the bus company, Nobina, said that the driver has been removed from service and that an internal investigation has been launched.

“I've only seen the video, but it's incredibly tragic and unpleasant to watch, and of course it's unacceptable and nothing we support,” press officer Eric Steijer told The Local.

“[The driver's] line manager has been in contact with him, but I don't know the details of that conversation. It's important to us that this is properly investigated and acted on correctly from the start,” he said, adding that the bus firm would attempt to contact the Syrian passenger to offer an apology.

The incident was reported to the police on Tuesday. The bus driver is also understood to have filed a similar report for violence against an official, telling officers he received a slap on the arm during the altercation.