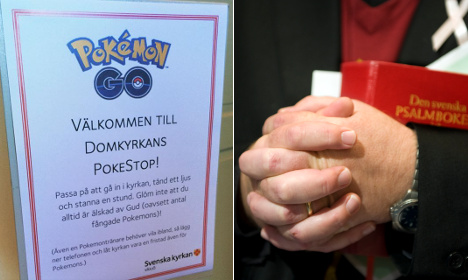 Signs outside the Växjö Cathedral and the Maria Church in southern Sweden advertising the holy places as Pokestops – where users of the gaming app can collect new artillery to catch the pesky little cartoon monsters – have gone viral in Sweden after pictures were posted online.

“Take the opportunity to enter the church, light a candle and stay for a while. Don't forget that you are always loved by God (no matter how many Pokémon you catch),” say the signs.

But don't go hunting Pikachu in the pews. The message continues: “Even a Pokemon trainer has to rest sometimes, so put down the phone and let the church be a sanctuary even for Pokemon.”

The Local spoke to one of the priests behind the idea on Tuesday.

“Both my husband and I downloaded Pokémon when it was released in Sweden on Saturday and discovered on Sunday that the Maria Church, where he works, was a Pokestop,” said Elin Sundelin.

Nintendo and developer Niantic's Pokémon Go app has been sweeping the world since its release. The augmented reality technology allows players to physically walk around their surroundings to search for and 'catch' Pokémon, using their smart phone cameras.

But it has sparked controversy in several countries, including Sweden, the US and Germany, after users reported finding the monsters at museums, military cemeteries and Holocaust memorials.

Sundelin, who is based at Växjö Cathedral, said that she and her husband Stefan, who came up with the idea after seeing similar signs in the US, had mostly received positive reactions for their friendly way of reminding churchgoers to tuck their phones away.

“I don't necessarily think the church is an inappropriate location as such, but there are a lot of people here who are not here because it's a Pokestop, and it's important to respect that,” she said, but admitted that she too has been swept up by Pokémon Go's wave of popularity.

“We're no massive players, but think it's fun to go for walks and do this. I caught two Pokémon in my office during my 'fika' break [the famous Swedish tradition of enjoying a coffee and cake break]. And just before you called me I caught another one,” laughed Sundelin.

Read about what happened when The Local sent out one of our reporters to hunt Pokémon in Stockholm.