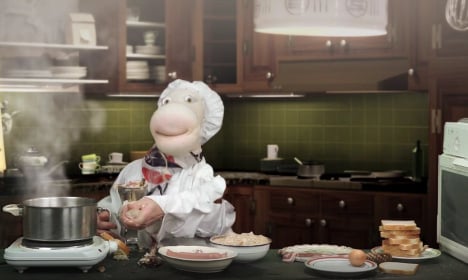 How, er, not to make haggis. Photo: SVT screenshot

The Scots dish is traditionally made from sheep's innards minced with onion, oatmeal and spices and wrapped inside the animal's stomach, although these days artificial skin is normally used.

But a children's television show took culinary creativity to a whole new level when the host – a pretend French chef by the name of Bon – instead decided to stuff the meat and juices in a condom.

Explaining in the video, which has also been posted on SVT's online site, that he does not have an animal stomach at hand, he reaches for a handbag, saying: “Grandma usually has things in her bag… perhaps there's something we can use. Balloons! That will work just as well.”

Except what he attaches to the sausage-style haggis machine is clearly not a balloon. It's a condom. And while you may think Swedes are known for their liberal approach to sex, parents stiffened in anger.

“I'm watching (…) Bon who is today making haggis and is using a CONDOM as a balloon because there wasn't a sheep's stomach. WHAT ARE YOU DOING?!?? Disgusting, unethical and highly inappropriate,” one furious viewer hit out on SVT's Facebook page.

Another parent explained her upset in slightly calmer tones in an interview with Aftonbladet.

“Children are curious and notice everything. They see that it's not a balloon and ask what it's for. It is very provocative that they think it won't be noticed. Children shouldn't even be asking those questions, it's completely wrong. You get really pissed off,” Tess Vesterlund, who watched the Tuesday programme together with her six-year-old nephew, told the Swedish tabloid. “You have to squeeze the balloon to shape the haggis,” says Bon. Photo: SVT screenshot

SVT's head of children's television, Johanna Gårdare, defended the condom haggis on Wednesday in comments emailed to The Local.

“It's of course unfortunate if our content upsets the viewers, whether it's the target group or their parents. The purpose in this case was to entertain. (…) I understand if you don't appreciate this kind of humour, but I can't see that it's inappropriate by definition to show a picture of a condom in a humourous show aimed at children in middle school,” she said, adding that she had only received three complaints from parents.

Asked if she was surprised by the reactions, she said: “Sometimes you get very surprised by what upsets people, because different things upset different people. Our intention is never to upset parents, but to entertain and deliver good content for the children (and parents). (…) In my experience all content that touches at all on the area of sex gets more reactions than other content, so for that reason I'm not surprised.”

It is not the first time Sweden's national public broadcaster has caused a stir in the Nordic nation. Earlier this year viewers flippered out when a dolphin was dissected on live breakfast television.

And last year SVT was forced to apologize after it accidentally sent a text message to 60 children aged between 10 and 13 which included a link to a pornographic gay website.

However, it is probably most internationally famous for its children's song about dancing cartoon genitals Willie and Twinkle (or Snippa and Snopp in Swedish) which was released in English last year after the song became a global hit.