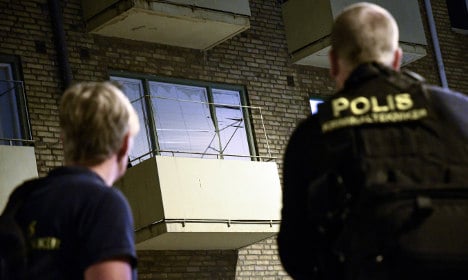 Sweden's third-biggest city Malmö was rocked by an explosion last night and a spate of shootings in the past week, including one at a shopping centre in the Rosengård area which got global attention.

But Swedes have been left scratching their heads at why so many international media outlets have appeared to link the incidents to recent suspected terror attacks in, for example, France and Germany.

An Australian breakfast news show even grabbed headlines in Sweden on Friday after, while reporting on the explosion under a breaking news label, it stressed the city's high Muslim population and wrongly claimed that it took place on the same day as a Gay Pride march.

As Sweden's biggest English-language newssite, The Local decided to take a closer look at recent incidents in Malmö, and spoke to the city's police commissioner and deputy district chief Mats Karlsson.

1. Are recent incidents in Malmö linked to terror?

No. In fact, they closely follow a pattern of previous crime in the city.

Karlsson strongly denied links to terror when speaking to The Local on Friday: “We're investigating the incidents with the information we have, and we have not been able to see any connection to terrorism.”

2. What has happened in the past days?

There have been three shootings and one explosion.

July 26th: A man is shot in the leg at the Rosengård Centrum shopping mall and taken to hospital. Police look for a 22-year-old suspect who has since been detained in absentia.

July 27th: A man is found injured in the Rosengård area. It remains unclear if the wound was caused by a gun or a knife. No arrests at the time of writing.

July 28th: A man shows up at the emergency ward in Malmö with a gunshot wound. Police find traces indicating a shooting in Persborg's square in Rosengård. A 22-year-old suspect has been arrested.

July 28th: Explosion in an apartment on Trelleborgsgatan in the Möllevången area. Police believe it was caused by a hand grenade, but this is not confirmed. No injuries. No arrests at the time of writing.

3. Are the incidents connected?

They are not directly linked in the sense that one shooting is “revenge” for the previous shooting. But there are common threads, which explain why information is often scarce: 1) The victim does not want to cooperate, 2) witnesses do not want to speak and 2) the victim and the perpetrator are known to police.

Sometimes, although police have not commented on whether or not this is the case in these cases, the same individuals also feature in several investigations despite the incidents not being directly linked.

Malmö has a history of similar disputes. It resembles a kind of gang violence, but police are increasingly refraining from using that label, because many of the groupings are quite fluid and different in character.

“These are disputes where violence escalates very quickly. It could be something, excuse the expression, as trivial as over an ex-girlfriend who is now seeing someone else,” says Karlsson.

“We're working on bringing down the number of weapons and seizing offenders. But there is also preventative work, to prevent that these people get so hardened that they feel that picking up a gun and shooting each other is a reasonable response to these things”.

4. What do you think about the international coverage?

“In one way I am not surprised after everything that's happened in Europe and incidents which don't get as much media attention in the Middle East,” said Karlsson.

“But I was told about the shooting at Rosengård Centrum as soon as it happened, and the information I got was very different from what I read in the international press.”

“If you want to see a connection [to terrorism] you see one. But these articles were extreme, I've never seen such distortions before. There were various British newspapers writing about 'people running for their lives to escape an ongoing attack', when in fact it was an internal dispute between these two guys.”

6. Why do you think they linked it to potential terrorism?

“Because it fits the narrative so well, it was a 'truth' that they wanted to see, whereas you who are represented here in Sweden call us and get information. (…) I think it was because the shooting reminded people of Munich and there's a pressure to be the one to report the news first,” said Karlsson, adding that in the internet age he and his colleagues feel that pressure too.

“But it's important to keep our heads cool. We all have a responsibility to help each other problematize – not just media and police, but also the individual reader – because it's not all black or white.”

“What concerns me is that it is unfortunate if everything gets labelled as terrorism, because the concept gets eroded, but also you forget that there are other serious criminals. We need to also work to stop serious crimes that are not terrorism.”

“I was asked by one newspaper if we had been getting a lot of phone calls from worried Malmö residents and the answer is no. It is just my guess, but I would imagine that those who are there in the area realize that it's not that black and white,” said Karlsson.

Unlike terrorism or shooting sprees, the general public tends not to be the target during Malmö's waves of violence. The incidents are internal disputes between people who often have a criminal past. And in the case of Thursday night's apartment explosion, police believe that too was targeted at particular invididuals.

“It is unclear who is using that apartment, because it is not the people who are registered at the adress, but we have an idea of who it might be. It is still very serious, but these incidents are criminals attacking criminals, it's not something directed at outsiders, at ordinary people,” says Karlsson.