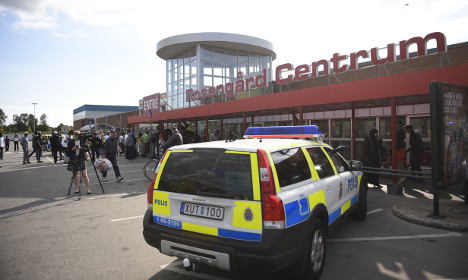 Police at the scene of the shooting in Rosengård Centrum. Photo: Emil Langvad/TT

Local media report that the man, who had been formally detained in absentia, handed himself in voluntarily to police on Monday afternoon.

“He is suspected of involvement in an attempted murder in some way. His name came up quickly when we took the first steps of our investigation at the scene,” police spokesperson Ewa-Gun Westford told news agency TT.

The victim was shot in the leg at Rosengård Centrum last Tuesday afternoon but did not suffer life-threatening injuries. It was reported that the gunman fled the scene on foot, while both men were previously known to police.

The authorities had strongly denied reports following the event in several international media outlets attempting to link the shooting to suspected terror attacks in France and Germany.

Last week The Local spoke to Malmö police commissioner and deputy district chief Mats Karlsson, who said that the investigation had not produced “any connections to terrorism”.

He added that the shooting was not directly linked to two further shootings and an explosion which occurred in the city in the days after the incident at Rosengård Centrum.