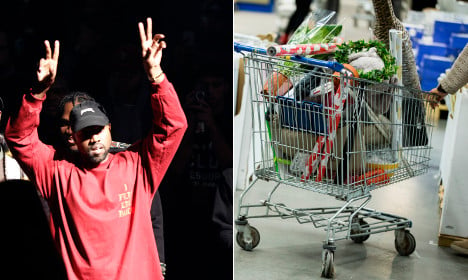 It seems a visit to Ikea's birthplace and headquarters, in the small southern Swedish town of Älmhult, earlier this year made an impression on Kanye West.

So much so that he is not above making a public appeal to convince the global furniture giant that it really ought to let him design their next Billy bookcase… or something.

“I have to work with Ikea – make furniture for interior design, for architecture,” West told Britain's BBC Radio 1.

In particular, he said students would want him to design “a minimalist apartment inside of a college dorm”.

Ikea denied, after the rapper paid a visit to its Älmhult flagship store in March, rumours they were launching a design collaboration, and said he was only there for inspiration. Älmhult residents were excited to see the celebrity visitor and one restaurant owner described scenes of chaos as West sat down to dine at his brasserie.

“He was here with friends and aquaintances (…) It was amazingly nice. He was very friendly and enjoyed the food. It was a memorable day for tiny Älmhult,” Mats Stjernqvist, the owner of Brasserie Goaroije, told Swedish tabloid Expressen at the time.

“Words spread, so there were a lot of fans out there. We had his bodyguard to help us with that.”